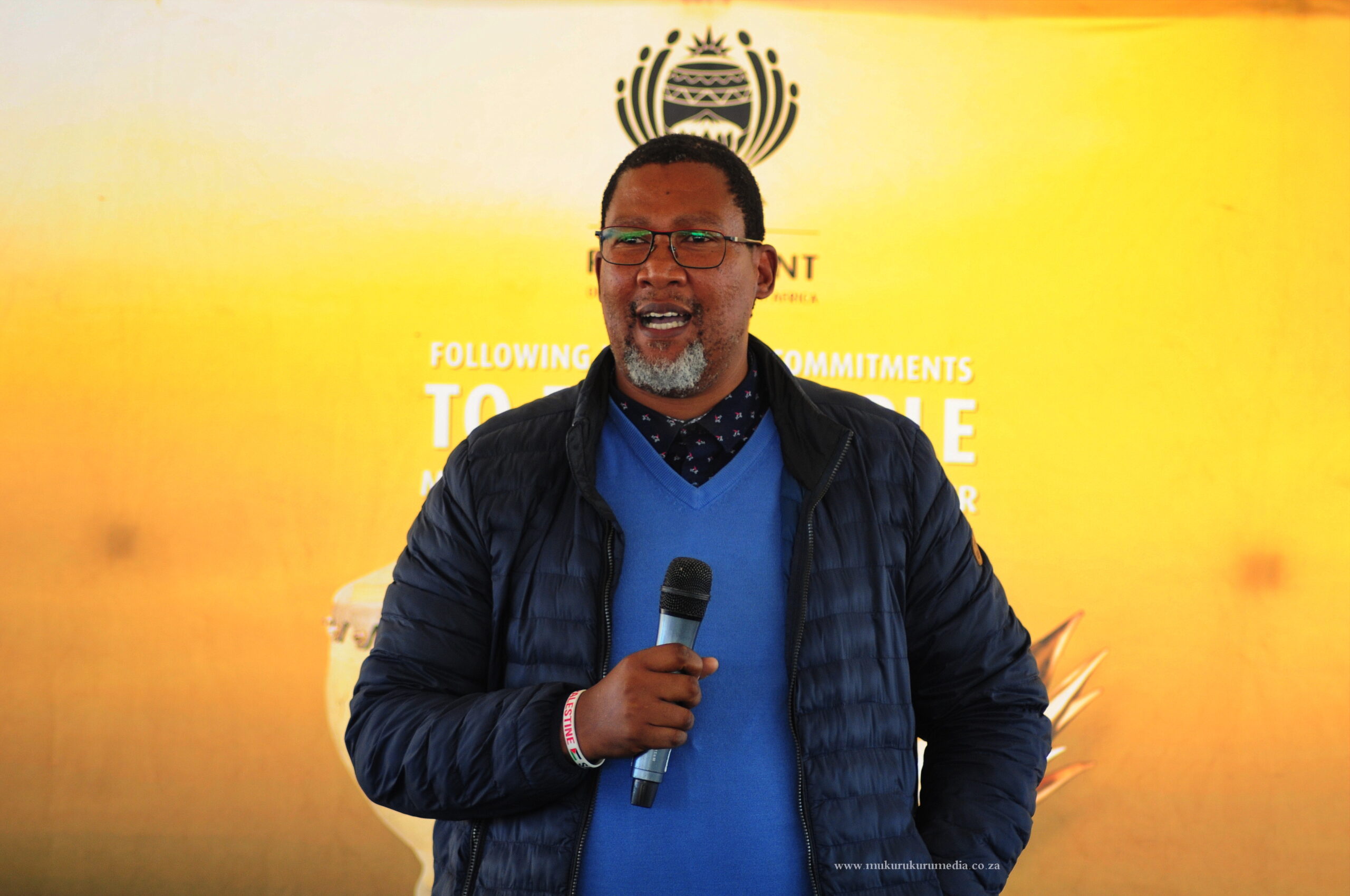 The joint oversight on a three day tour of Limpopo and Free State provinces heard submissions of poisoned cattle, illegal evictions, intimidation, harassment and unfair labour practice.
The joint oversight follows the National Assembly’s resolution, adopted on 10 November 2020 on the two committees, to assess the impact of legislation and explore opportunities for legislative review.

The resolution instructed the committees to jointly focus on:
• Comprehensive oversight on executive action in implementation of legislation aimed at improving the living and working conditions of farm workers, farm dwellers and farmers;
• Government’s commitments toward improved living and working conditions in the farming communities, including work done by different stakeholders in the agricultural sector; and
• Impact assessment of legislation affecting farm workers and make recommendations for legislative amendments.

One of the sittings was held in near the town of Groblersdal where the overwhelming majority of farm owners are white. But curiously there wasn’t a single white farmer in attendance at the sitting conducted in a marquee along a busy road leading into the town.

Mukurukuru Media editor spoke to the chairperson of the Portfolio Committee on Agriculture, Land Reform and Rural Development – Inkosi Zwelivelile Mandela after the sitting in Groblersdal in Limpopo on Saturday.

Lucas Ledwaba: We are in Groblersdal and most of the property owners here are white farmers. As you heard from the testimonies by people here, there’s not even one white farmer who came to the sitting today. Does that concern you? Do you consider this as a snub by white farmers of this parliamentary process?

Inkosi Zwelivelile Mandela: We do, it’s a process that we would have wanted to see all stakeholders being here in terms of the agricultural sector. But as I stated in my opening remarks that this oversight has been a result through submissions that were made to Parliament, on working and living conditions of farm workers and farm [tenants] to help us and therefore, this is why we even on coming here understood that our audience primarily will be to see farm workers and farm dwellers and labour tenants which have been evicted from the farms they were born in, their fathers were born in and grandparents and forefathers. We have also, particularly today, enjoyed seeing two white farmers who are neighbours to the Ledwaba and Mahlaela family who are coming to support the families in their own labour tenant claim [during an earlier visit to Rietfontein farm]. It shows that at least even if they were just two that came, they still got a bond that we see through South Africans, irrespective of race. So we are happy as the parliament members that came on this oversight, both being from employment and labour, as well as from agriculture, land performing relative allotment.

Lucas Ledwaba: Listening to some of the inputs by members of the public here one gets the impression that in the farming sector Apartheid is still very much alive. How does the portfolio committee take this forward in ensuring that we change the prevailing conditions on the farms?

Inkosi Zwelivelile Mandela: It’s just been horrific listening to the submissions of our people, particularly when we hear of the atrocities that are being meted out against them on a daily basis from the farms that they work on. And from the farms that they are forcing illegal and forceful evictions, some that were evicted are prohibited and prevented from coming through a visit their family graves. And it is indeed a moment where we are saddened by what we hear from our people. And I think at some level, they’ve been let down by government or officials in their respective departments, both the employment and labour as well as agricultural and performing rural development. Many of them have been engaging with department officials without any solutions being brought. Some cases are simply people that were injured on duty during work hours, and these measures have not been taken seriously and finalised on behalf of the complainants. Some were dismissed without any compensation for having worked for years on the farms. And these are issues that we would like to ensure that the officials are held accountable and are able to bring about quick solutions. And there are also issues like land claims that are sitting with the Land Claims Commission. And we’ve picked up some which were valid claims, which were done pre 1998 which we need to follow up on. The land claims Commissioner Mama Gobodo [Nomfundo Ntloko-Gobodo] has informed the committee that there’s plus minus about 6000 remaining cases to be settled, which will require almost a budget of about R72billion. And the department on the budget it receives, it sets aside at least about a R2billion to attend to this. So it will take several years before we can be able to realise these land claims being resolved. But there are labour tenant claims that were closed by the 31st of March 2001, which we would like to also follow up on and ensure that the labour tenants are given the land tenure rights.

Lucas Ledwaba: In 2003 and 2008 the South African Human Rights Commission conducted hearings on working conditions and living conditions on the farms. One of the observations that they made was that government officials, police, lawyers, labour inspectors do not have access to farms. And as a result, farm workers are some of the most isolated in the labour sector. Listening to the testimonies of people here do you get a sense that anything has changed?

Inkosi Zwelivelile Mandela: It doesn’t seem to have changed. We have also witnessed this ourselves as the portfolio committee when we went to Mpumalanga, a farm owner simply declined to have us come to the premises. And I also believe that here in Limpopo is the case, the two farm owners we are supposed to visit tomorrow have come up with excuses of not being available, and therefore prohibiting us from seeing the farm workers and farm dwellers. But we have said, as the two portfolio committees that we must remember what our mandate is, we have not been called by farm owners here. We have been called by farm workers and farm dwellers because of their plight in terms of working conditions as well as their living conditions. Tomorrow, we want to go to those farms. And if the farmer prohibits us from gaining access, it is to see as to how we can meet with the farm workers and farm dwellers who wrote to Parliament and made submissions because in all through honesty, this oversight is totally afforded the benefit of farm workers and farm dwellers and we want to ensure that we do our level best to engage them and understand what they applied is.

Lucas Ledwaba: Does the law give you any powers to take action against anyone who denies you as the parliamentary portfolio committee access to their property?

Inkosi Zwelivelile Mandela: [There] is the issue of these farms being a private a privately owned farms and therefore, this is what is often used in terms of preventing us to gaining access. But we must understand that while the farm owner enjoys certain rights, farm workers and farm dwellers and labour tenants also enjoy a rights that need to be protected. And this is why as a delegation we will be going with the relevant structures that can be able to say these are the laws that these farm workers and farm dwellers enjoy and we are here to see them and we cannot be prevented from engaging with them.

Lucas Ledwaba: Final question from me. In the Limpopo Valley, Messina All Days and also in the Malelane [Mpumalanga] area, there has been concern that has been raised that farmers are replacing South Africans with undocumented foreign nationals because they do not want to comply with the minimum wage set by the Department of Labour. Have you encountered those kinds of inputs during your visit?

Inkosi Zwelivelile Mandela: Yes, we have seen and been witness to that, in employ Mpumalanga. For example, the Department [of Labour]actually gives farm owners licenses to employ a certain number of foreign nationals. We visited DMV farm here in Limpopo yesterday where the firm is employing 28 permanent employees. Out of those, only four [are] South African citizens and 24 [are] foreign nationals. We have therefore requested for an intervention of Home Affairs, to look firstly into the foreign nationals that are working in these areas if they got proper documentation to be in South Africa, and also have work permits to occupy these positions, because some we are told [they] are skilled labourers, and we do not have the skill. And this will need to be verified and looked into. I want to raise this as an issue of concern being a South African, and knowing the plight of our people during the struggle for liberation. In those days when we were in camps outside the borders of South Africa, our neighbouring states kept us in camps. We were not allowed any free access in their towns and in their cities. We were almost given a refugee status and kept in those camps, and didn’t have this ability of going to seek for work and taking local jobs. And therefore it is also important for us in this new political dispensation, understanding the role they played for us to get this credit. It still augurs well on us to protect these jobs for our own citizens. If you look at the plight of young people, today, we are sitting with almost 66% of youth unemployed. This is totally not acceptable to us as parliamentarians, and legislatures. And we have to find solutions of how we can bring these figures down. It is evident across rural communities in the landscape of our country. And these are opportunities we can attract young people to be able to be employed and not only depend on these R350 grants. – news@mukurukuru.co.za