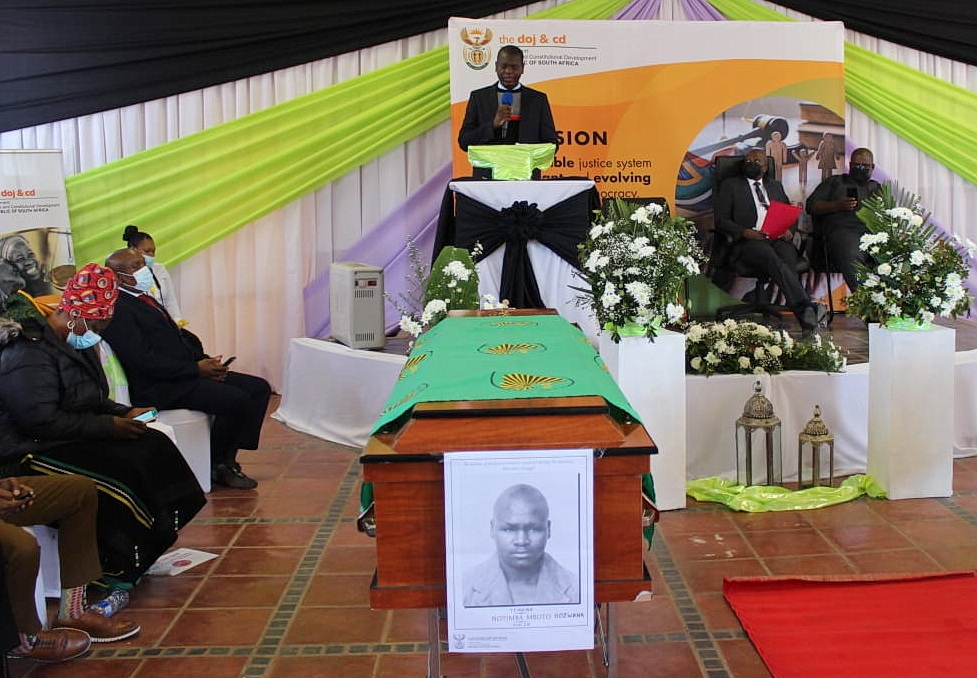 THE spirits of Pan Africanist Congress of Azania freedom fighters who were executed by the Apartheid regime more than 50 years ago united old political rivals at a reburial ceremony in the Eastern Cape.

The Department of Justice and Correctional Services, through its Gallows Project repatriated the remains of Bonakele Ngcogolo and Notimba Bozwana. The two PAC Task Force members were reburied in Cofimvaba at the weekend.

Minister of Justice and Correctional Services Ronald Lamola, who is also a member of the ANC NEC presided over the ceremony.

Lamola, describing the pair as “gallant fighters” said government has ensured that of the 130 hanged political prisoners, 47 had their remains exhumed by other parties.

The PAC has previously expressed concern that government appeared to be sidelining the party’s military veterans and was instead giving preference to the ANC’s Umkhonto we Sizwe military veterans.

There has been no love lost between the two movements since a break away from the ANC led to the formation the PAC in 1959. Leaders from both sides have on different occasions spurned talks of collaboration or reunion.

However, it appears in recent years the spirits of departed freedom fighters are slowly bringing helping to ease hostilities.

In one of such gesture recently, Minister of Arts and Culture Nathi Mthethwa postponed the official opening of an exhibition honouring the PAC’s founder Mangaliso Robert Sobukwe.

This was after learning that the PAC leadership had not been invited to the event at Kgoši Mampuru Prison in Pretoria.

This weekend PAC president Mzwanele Nyontsho expressed appreciation for the government’s continued work in ensuring the PAC’s freedom fighters killed by the Apartheid regime are exhumed and given dignified send-offs.

“We may belong to different schools of thought and different formations in the broad based liberation movement, but we All belong to the authority of the State. The PAC has been lamenting the point of the State treating our cadres with dignity and respect. In this case, the repatriation of the bodies of Poqo martyrs to their loved ones, the State has done good. For us in the PAC leadership, this is a noble act,” Nyontsho said in a speech to honour the fallen cadres.

“I would be making a mistake if I do not acknowledge and thank the leadership of the Executive Authority in making these exhumation and reburials to take place,” he said.

Nyontsho commended the Ministry of Justice and Correctional Services saying it has been consistent and true to task despite the change of personnel in the office. “The political leadership have been outstanding in carrying out this immense task. about what it termed preferential treatment given to the how the government was treating,” he said.

Lamola said: “We are forever indebted to our liberation struggle stalwarts; we shall continue with efforts to ensure that their memory lives on. Our role is to deepen democracy and constitutionalism to ensure that their deaths were never in vain. We must also reach out to those who worked towards entrenching apartheid and are its beneficiaries, not to mete out vengeance, but to build a truly inclusive society and learn from our painful past.”

Ngcogolo and Bozwana, members of the PAC’s Task Force, its armed wing Poqo were executed on 11 February 1964. Describing the circumstances behind their arrest Lamola said Ngcongolo and his comrades had travelled by train from Cape Town to attack representatives and symbols of the apartheid regime in the former Transkei.

He said on 13 December 1962, at Queenstown station en route to Qamata, police demanded passes of the PAC Task Force members and began searching them.

“A conflagration erupted, one police man was killed and three Poqo members were shot dead by the apartheid police forces. Many Poqo members and police members were injured. Ngcongolo was also shot and injured,” Lamola said.

“Among the heroes and heroines of our people, there are those who gave a new momentum to the liberation struggle. Some laid their lives for freedom and democracy to be born in this great nation. Some of those heroes are Bonakele Ngcogolo and Notimba Bozwana who were cruelly executed by the Apartheid regime,” Lamola said.

“The people who lay here before us today, were inspired by young men who changed the manner in which our liberation struggle was waged. Robert Sobukwe, Anton Lembede and A.P. Mda were young men who believed that this country can be different.

“They did not just have a clear vision of what shape our society should take. They had a clear programme of action on how South Africa should be reformed.  Surrounded by a racist society, Robert Sobukwe was bold when he said “There is only one race, the human race.” news@mukurukuru.co.za

Published in Africa and Our Stories