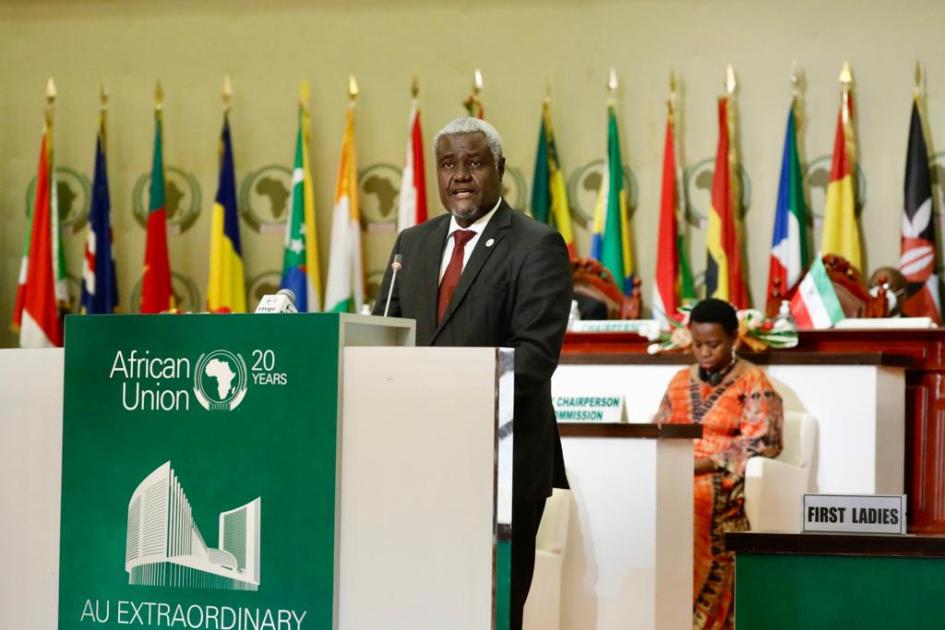 A lack of political will and poor support for countries affected by the scourge of terrorism are some of the factors impacting on the fight against this phenomenon in Africa.

“Firstly, because of insufficient African solidarity with the countries that are victims of terrorism, but also because of the non-respect of our own commitments. I will only cite the case of the African Standby Force which, since its creation, is not yet operational. On this issue, the political will has been lacking, although we have the means and the men we need. African armies number about 2,700,000 men. Mobilizing only 1 to 2% of this workforce and providing them with the necessary means would make it possible to reduce our dependence on foreign forces and to face terrorism, with a better chance of success,” Mahamat said.

The African Union Assembly, at its 35th Ordinary Session held in February 2022, resolved to convene an Extraordinary Summit on Terrorism and Unconstitutional Changes of Governments in Africa (UCG) as proposed by the Republic of Angola.

The Summit was set to assess the persistent threats, evaluate current response mechanisms, and decide on the specific actions and measures necessary to strengthen the collective security of Member States facing terrorism and violent extremism.

Mahamat said the terrorism phenomenon was initially located mainly in Somalia and Algeria.

“Defeated in Algeria, it unfortunately prospered in Somalia. It was from 2011 that it really exploded in Africa thanks to the Libyan crisis. This encouraged the arrival in the Sahel of thousands of foreign fighters and mercenaries. It caused the influx of defeated terrorist organizations in the Middle East. It caused the uncontrolled circulation of arms. Gradually, terrorism grew and extended its tentacles to other regions of the Continent,” he said.

He raised that the “terrorist contagion continues to grow” from Libya, Mozambique, Mali, the Gulf of Guinea in West Africa to Somalia via the Sahel, the Lake Chad Basin and eastern DRC.

Mahamat said it is imperative that the continent’s leaders “reverse the current trend of our collective security as well as that of our governance model.”

“Let’s stop considering the fight against terrorism as an ordinary phenomenon that can be resolved through meetings, seminars and other colloquia. Strong and coordinated actions and concrete intra-African solidarity commensurate with the danger are the conditions for our victory over this gangrene,” he said. – https://au.int/en