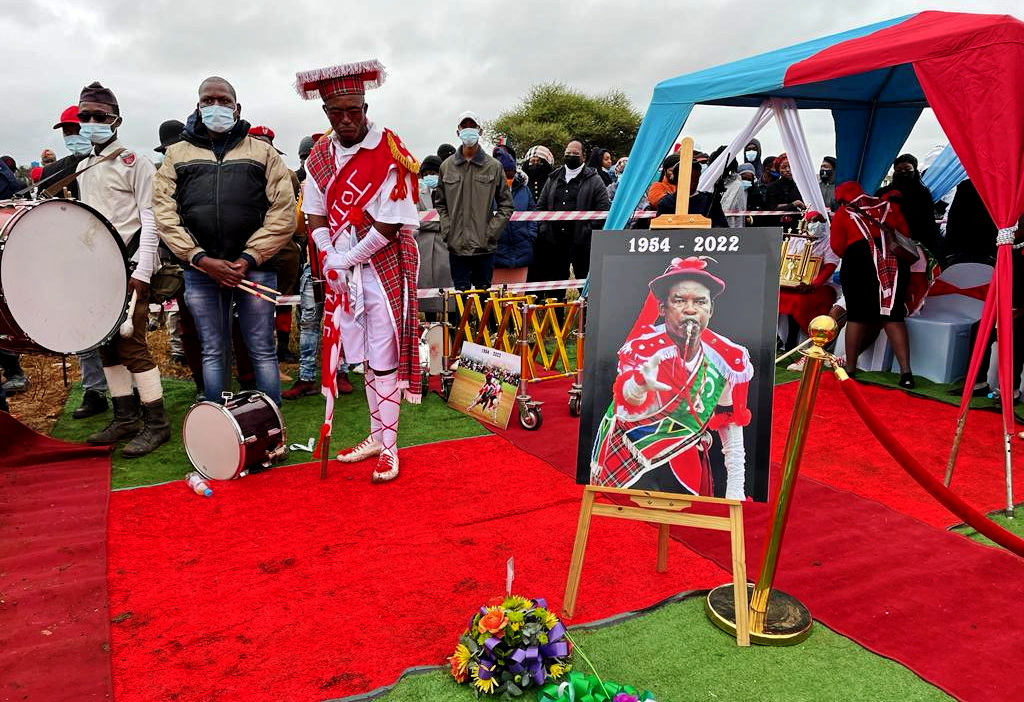 WHEN the hearse carrying Frans Rocker Monaledi’s body to his home ahead of his funeral a bow shaped rainbow loomed across Makapanstad village where he had entertained people through his Shining Star troupe over four decades.

To village residents who had come to respect Rocker through generations, this was a sign that a son of the soil had finally come to home rest and the gods were acknowledging his contribution and final return to his home village.

Monaledi who was featured in the international documentary Troupes of War-Diturupa, was a local hero who kept the memory of men who had participated in World War I and II through his craft as leader of the Shining Star.

A strict disciplinarian, self taught choreographer and passionate community builder, Monaledi kept local children, youth and adults on the straight narrow through his Shining Star for over four decades.

Monaledi passed away after a short illness at his home in Makapanstad on 16 May 2022. He was laid to rest on Saturday 21 May 2022.

Diturupa is a sub-cultural movement rooted in village communities north of Pretoria, the Moretele district of the North West province, parts of the Dr James Moroka district of Mpumalanga and Limpopo.

It owes its origins to the days after the World War I, when village men who served on the side Allied Forces through the South African Native Labour Contingent returned home after the war. Local communities celebrated the men as heroes and began a movement to celebrate their heroics every December.

On a drizzling Friday afternoon troupes gathered in Makapanstad to celebrate the life of their legend – Rocker. They marched in the rain, dressed in military uniforms of different types, blowing whistles and brandishing hand made wooden replica rifles alongside the hearse carrying Rocker’s mortal remains.

Among them was one of Rocker’s proteges, Mmutle Tabane, who joined the Shining Star in his youth. During that time he got close to the man he called Bhuda and learnt valuable life’s lessons. This is his tribute to Rocker:

“I knew Mr Frans Ntaba Monaledi at young age while I was in primary school. Frans was popular in our village as the leader of Shining Stars Troop, Radio Radi, Mbhacanga music lover and the decorated bicycles. A man popularly known as Rocker, however, those who were young like us called him bro Rocker or Bhuda.

I was inspired by his ethics and joined Shining Star in 1990. I started to know him better from that period. I had closer engagements with Bhuda as we shared ideas. We would look at how to keep the class of the group. Apart from the uniforms, we focused more into being a strong disciplined group and executing outstanding performances during the festive period in Makapanstad.

Bro Rocker respected our opinions and we acted positively with him to drive the troop for glory. We had the 20th year celebration in 1995 since Shining Star was established in 1975. That day we honoured him for the role he was playing within us (Shining Stars), and the community at large. We needed his legacy to be recognised while he was still alive.

“Bro Rocker was a father to us, he mentored us to become what we are today. He demonstrated the leadership role with high discipline and accountability. We were not just doing as we please around him. “Bro Rocker” was a vocal person one would differ with him in some aspect, however, he would not swear or call name nor raise his hand to anyone. He had respect for other people. We understand that people from far would reserve the 26th December to ascend to Makapanstad to be entertained by diturupa, but specifically, Shining Star.

The group led by Rocker was the talk of the village because of its outstanding performance of many years. Today as we will lay him to rest, I would like to thank him as a person who dedicated his lifetime to keep Makapanstad youth to stay put during December. I would like to appreciate him as a hero who rocked the playfield and outshined his counterparts in that area. We liked what he was doing and many have declared him as a winner. Bro Rocker selflessly entertained the communities in and outside Makapanstad, and it was evident when Matla-a-Sechaba came in that Shining Stars also won.

“Bro Rocker” started performing “diturupa” in Dertig under the leadership of his uncle, the late Mr “Mpyatowe” Monaledi. “Bhuda” took over the baton and ran with it.

Yes, it is true, as I have heard people and saw posts on social media that our hometown will be different on the 26 December [day of the diturupa festival]. Many people referred to bro Rocker by many different names, “Modimo-wa-diturupa”, King of diturupa, cultural legend to mention just a few. Bhuda was the face of diturupa and he is no more. The legend himself, the greatest diturupa master, has fallen and bring us to the end of an era he excelled in. Death has brought sorrow in the family, Shining Stars and the communities.

We have seen establishment of diturupa like Mabheneti, Kopanong, Tshwaraganang and recently Joining Free. Those troupes were influenced and inspired by bro Rocker. They will be part of the legacy that Rocker leaves behind. I wish Shining Stars does not die, we need to make his legacy continue. Together we can make it. We will miss him and may his soul rest in peace.”