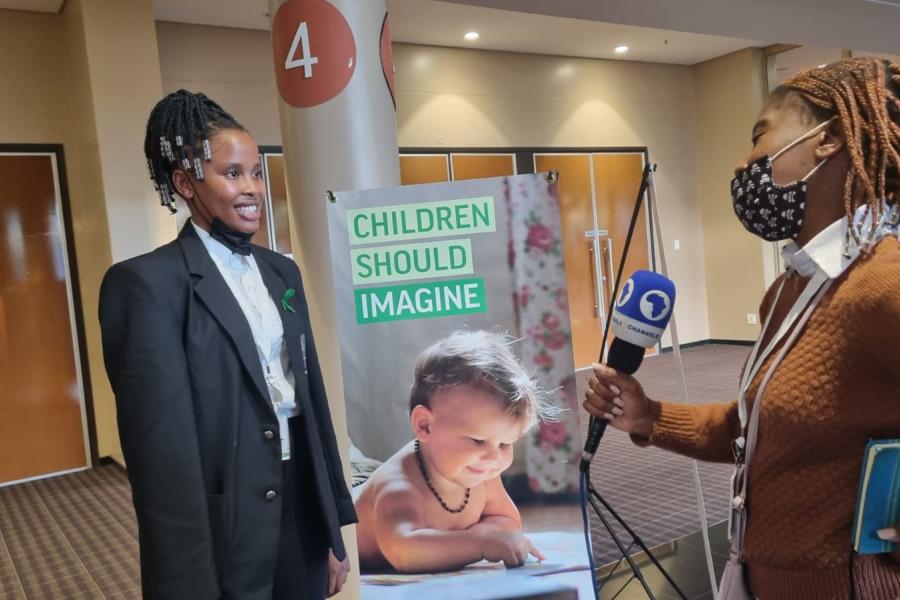 Thato Mhlungu, the 2019 Speaker of the Nelson Mandela Children’s Parliament as well as the child ambassador of the Gauteng Province. Mhlungu told the conference that the social issue of child labour has a deep place in her heart as she has witnessed a close friend being forced to work and fend for his family at a young age and that whole situation robbed him of his childhood. Photo: Supplied

POWERFUL nations have come under fire at the 5th Global Conference on the Elimination of Child Labour in Durban for not doing enough to end the worsening scourge of child labour in the world.

Regional Vice-President of the International Organization of Employers and Executive Director of the Federation of Kenya Employers, Jacqueline Mugo, says the world has not shown the necessary will and or pursued the comprehensive collective actions required to address them.

However, Children Rights Advocate and 2014 Nobel Peace Prize Winner Kailash Satyarthi was even more offensive, charging that the failure to end child labour was as result of what he calls a “discriminatory world order.”

Mugo says: “We are not here in Durban to blame each other but rather to redouble our efforts to work better together. Collective action is key if we want to succeed.”

She says, however, to win the fight against the global dilemma the root causes of the problem need to be addressed.

“We all know the root causes of this grave human rights violation: Poverty, informality, limited access to education, weak or lacking social protection floors, insufficient labour inspection and weak governance. If we fail to address these root causes of child labour in a comprehensive manner then we will surely not succeed in our fight,” says Mugo.

The ILO describes the child labour as work that “deprives children of their childhood, their potential and their dignity, and that is harmful to physical and mental development” while Unesco describes working children as child labourers when they are either too young to work or are involved in hazardous activities that may compromise their physical, mental, social or educational development.

Delegates from around the world have gathered at the ICC in Durban at the conference The 5th aiming to share good practice and to push for accelerated action towards the elimination of child labour. It also aims to assess progress made towards achieving Sustainable Development Goals (SDG) regarding child labour.

Adopting the 2030 SDG goals in 2015, world leaders resolved to “take immediate and effective measures to eradicate forced labour, end modern slavery and human trafficking and secure the prohibition and elimination of the worst forms of child labour, including recruitment and use of child soldiers, and by 2025 end child labour in all its forms”.

Satyarthi says he refuses to believe the world has no resources to eliminate the problem.

“I refuse to accept that the world is so far that it cannot eradicate the problem … We know what is the problem and what is the solution. But what we need is courage,” he says.

Director-General of the International Labour Organization Guy Ryder says, “Our national wealth needs to translate in the elimination of child labour by being distributed equitably.”

According to the International Labour Organisation (ILO) more than 160 million children are labourers while more than 106 million of that figure is out of school.

In June 2021, ILO and Unicef released a report which stated that the number of children in child labour had increased by 8.4 million children in the preceding four years – with millions more at risk due to the impacts of COVID-19.

President Cyril Ramaphosa , officially getting the week-long conference under way, has urged for countries to intensify efforts to ending all forms of discrimination against the girl child, especially with domestic work.

“We need to ensure that companies are more aware of child labour and do not support exploitative labour practices.”

Africa has the largest number of child labourers, with ILO estimating that 72.1 million African children are estimated to be in child labour.

Saulos Klaus Chilima, Deputy President of the Republic of Malawi says, two million children are in child labour in Malawi.

The conference is expected to run until Friday. – news@mukurukuru.co.za

Published in Africa and Our Stories