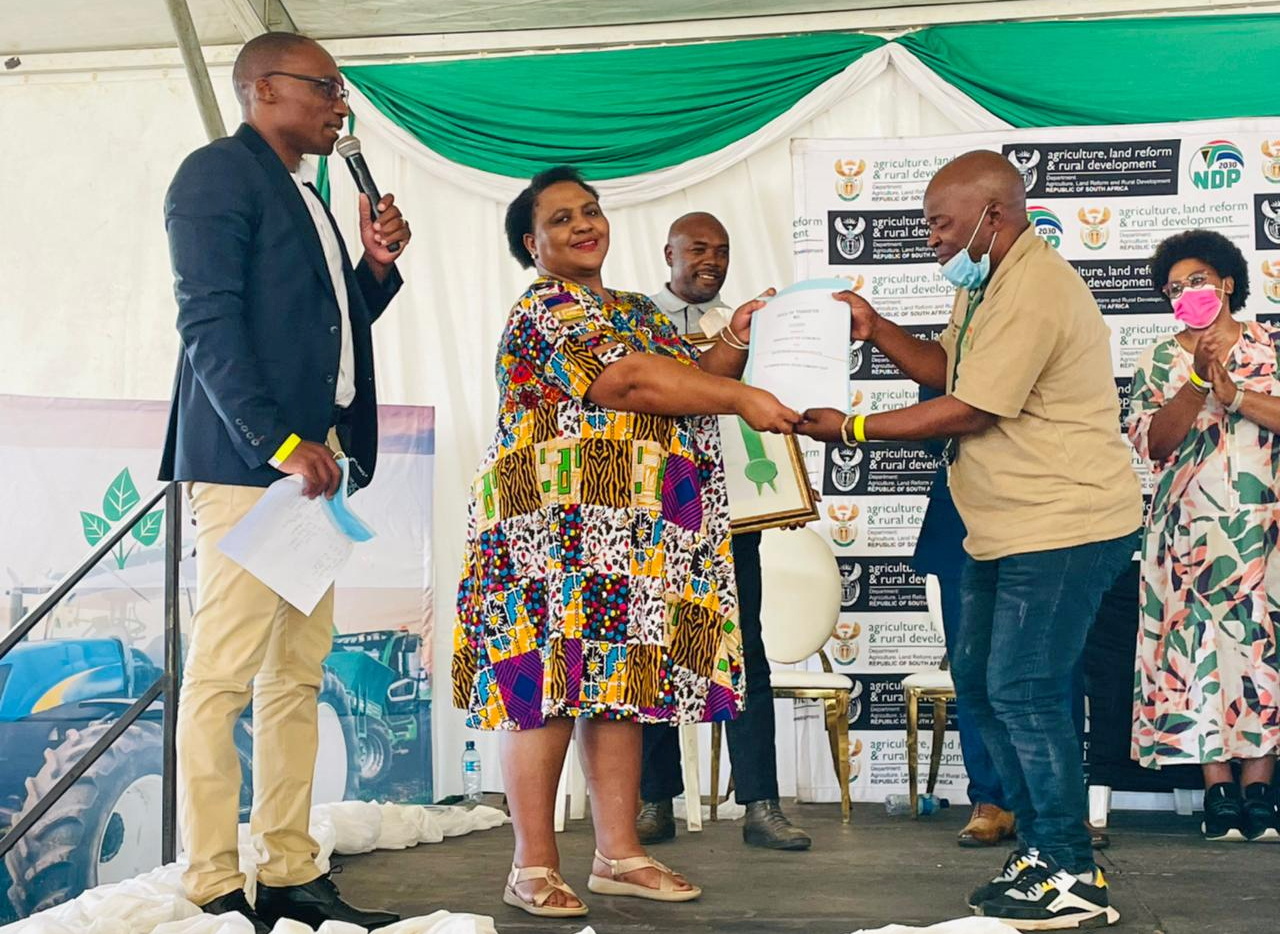 The community of eMakhasaneni near Melmoth in northern KwaZulu-Natal which was recently handed title deeds and farming equipment worth over R1 billion is worried about the threat of a proposed mining project in their area.

The rural communities lodged their claims in 1995 in partnership with the South African Farmers Development Agency (SAFDA), and have been able to sustain the production of timber, sugar cane and avocados.

At the forefront of the lengthy process was the leader of the Makhasaneni community, Mbhekiseni Mavuso, who even though elated at the developments, is highly concerned about Jindal Africa’s looming mining activities in the area.

“We are very happy with the outcome of the Minister having heeded our call and handed over our title deeds, this is the same land we were protecting against the mine,” said Mavuso.

Makhasaneni village, which falls under the Entembeni Traditional Authority, has been vocal about its anti-mining stance, since 2011 when residents were disgruntled about not being engaged in any matters of the mine’s developments in their homeland.

“We need to do something for the upcoming generations, and since this land was given to us by our fore-bearers, now we have to give it to the next generation.

Earlier this week, President Cyril Ramaphosa mentioned at the Africa Mining Indaba in Cape Town, that the government had heard the requests for private operators to be permitted to “operate the country’s dedicated coal, iron ore, and manganese lines”.

“We need to clear the backlog of mining and prospecting rights and mineral rights transfer applications, put in place a modern and efficient cadastral system, and implement an effective exploration strategy,” Ramaphosa said.

Ramaphosa stated that the development of mining in the country would not be achievable, except by improving the working and living conditions of mineworkers and mining communities.

According to a report titled Comments and Responses Report: Melmoth Iron Ore Project of 2022, Jindal is “now in the Scoping & Environmental Impact Assessment phase of the project. In that regard, the project Scoping Report will soon be made available for public review.”

Jindal’s prospects of mining, which has led to divisions within the 29 affected communities around Melmoth, came to a halt in 2016 for several reasons including; conflict in the consultation processes and the project losing its profitability edge.

“In 2016 the price of iron ore dropped significantly, and the project was therefore no longer economically viable. In the last two years, the iron ore prices have picked up again, making the project an attractive one”.

The report further stated that Jindal had not yet been granted the mining right, “therefore there is no certainty that there will be a mine.”

Should the Department of Mineral Resources and Energy grant Jindal mining rights, a timeline of around five years is anticipated before the mine starts operating.

During that time, Mavuso, who has been summoned to attend a meeting around this matter at the Entembeni Tribal Council on Tuesday 17 May, hopes that the mine could be more transparent with the community this time around.

“I want the mine to come back to the communities and hear their views and suggestions if they have any so that everything happens on the communities’ terms.

“I am now starting to feel like my life may be in danger again as I am hearing those sort of rumours. Previously in 2013, I was able to go into hiding through organisations such as the Land and Accountability Research Centre and Justice and Peace,” Mavuso said.

Diversification Specialist Dr Marilyn Govender of SAFDA said that she appreciates mining’s ability to impact the economy however, agriculture and mining cannot take place close to each other because there would be an environmental impact of mining on agriculture.

“What has been raised is that the agricultural footprint cannot be reduced or diminished by any mining activities because this is the main income generation for the farming community in Melmoth,” Govender said.

Govender feels that should there be an area that is safe to mine, then from a development perspective, there should be ownership or shareholding opportunities for affected communities.

“It mustn’t be that they are given menial jobs on the mine, that is insufficient for them, they must also benefit from the new revenue streams,” Govender said.

Nqobile Dludla, who through the intervention of Oxfam, formed part of the youth that paid a visit to Mtubatuba’s Somkhele mine recently, said he does not see the need for a mine to change the harmonious existence of farming communities.

“I had never laid eyes on a mine before, however after seeing Somkhele mine, I think I am certain that we can do without this Jindal mine in our area,” Dludla said.

Noting the underdeveloped areas around the mine, Dludla said there is nothing to desire from what mines promise to bring to the people living nearby. – news@mukurukuru.co.za

Mokgadi Mogy Mashako
More from Our StoriesMore posts in Our Stories »