Have any lessons been learnt from long drawn out Marikana strike? 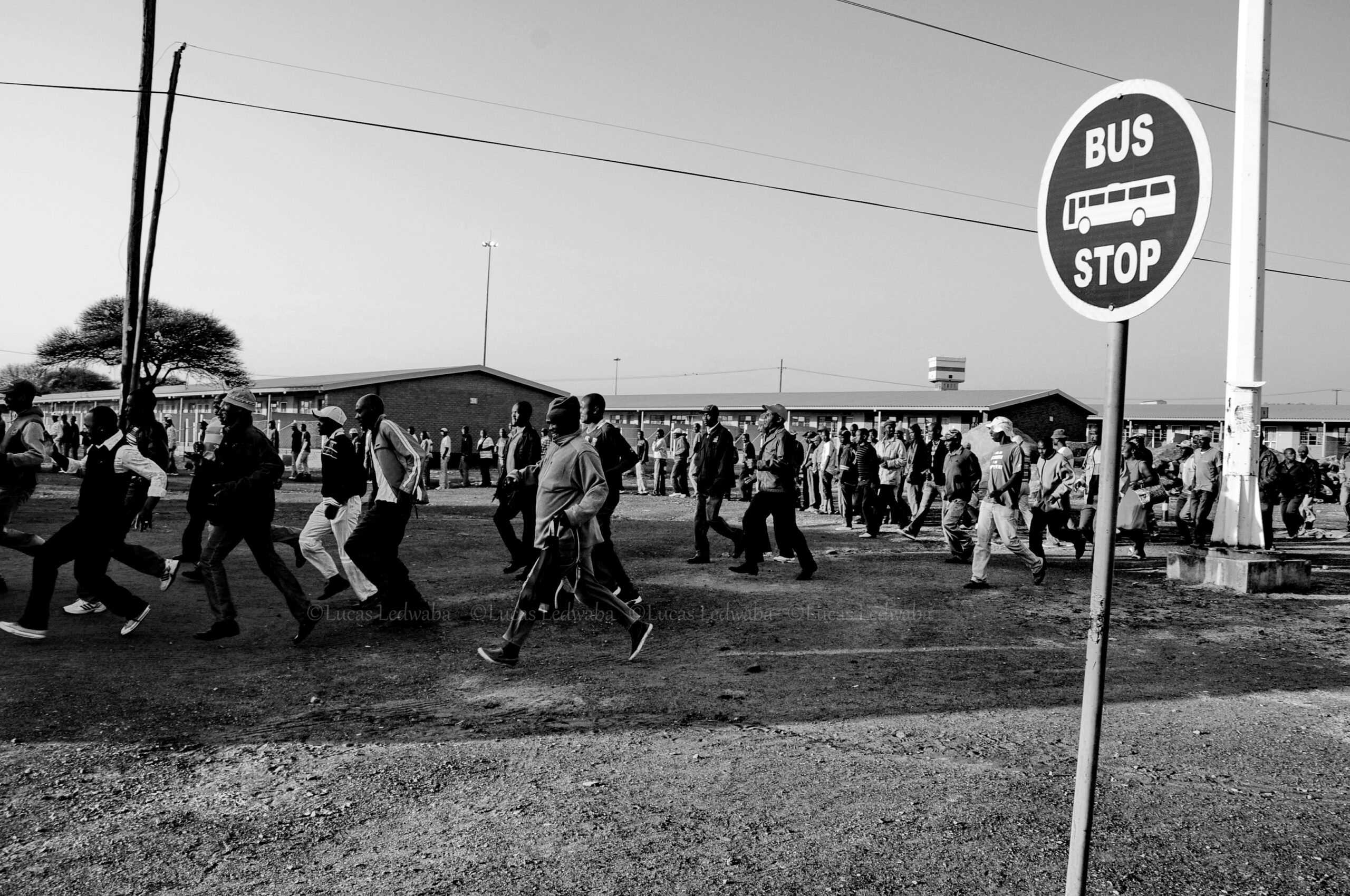 Back to work...Lonmin Plc rush to catch the bus on their first day of work after a month long strike that resulted in the killing of 44 people in Marikana during August/September 2012. Photo: Lucas Ledwaba

Mineworkers employed by Lonmin Plc rush to catch the bus to work after a month long strike that resulted in the killing of 44 people in Marikana during August/September 2012 in the above photograph.

The workers were buzzing with relief and excitement after a long month of hardship. The no-work-no-pay rule had caused massive suffering in the hostels settlements around Marikana. As the strike dragged on for weeks – workers ran out of food and money to buy food.

Spaza shops ran out of stock. During mass meetings held on an open field near the Nkaneng settlement and later at the Wonderkop stadium, workers asked journalists for food. Dogs hung around an area where throngs of journalists often camped to file stories – searching for leftovers.

Calls from hungry family back home kept reaching the men who themselves were starving in Marikana. Some of the workers privately expressed their wish for the strike to end – the strike was necessary and worth it, their colleagues had been killed, but back home they said, our children are hungry, they are crying. The strike went on.

The little town of Marikana was deserted. People walked around Nkaneng settlement in a frustrated daze. Then one afternoon in September, at a mass meeting at Wonderkop stadium just near Nkaneng, it was announced the strike had ended – the workers were returning to work the very next day. The place erupted into spirited singing.

The workers marched in the streets in excitement – clouds of dust rising into the sky to merge with smoke from the wooden and paraffin fires from the shacks. The tension of the past five weeks melted into the warm early spring evening.

Early the next morning the men were ready in their white overalls, boots and madolo, waiting in long queues at the Wonderkop hostel, waiting to board the busses that would take them to work.

For those few hours as dawn broke, the excited chatter and laughter of the men filled the cool early morning air. A new dawn was breaking over Marikana. Unconfirmed reported were going around that the workers would receive sheshabuya, a portion of their wages to cover for the period they had not earned a living, once they returned to work.

As the busses breezed into the hostel waiting area, men ran forward in a bid to be first on the bus. It was a heart warming scene, deeply sad even. It was a little like learners excited to return to school at the start of the first term, but it wasn’t quite that. People had died. Back home children were starving. Even the workers themselves were hungry. Ten years later, workers at Sibanye Stillwater are engaged in a lengthy strike.

Moneyweb reports that “Sibanye calculated that each Category 4 employee has lost R33 672 in wages since the beginning of the strike 61 days ago while Category 8 employees have lost out on R41 724 each – for the sake of an extra R200 per month.”

The strike has gone on for over 61 days today. Just one month without a salary for these workers results in massive devastation for the workers. Two months without wages means disaster, especially for those little ones back in far flung villages depending on these wages, families and extended families of up to 20 people or more, depending on this one pay packet from this one individual. The unions are refusing to budge. So too is the employer. The strike will end at some point, it has to, but who will be the winner? Will there be a winner at all?