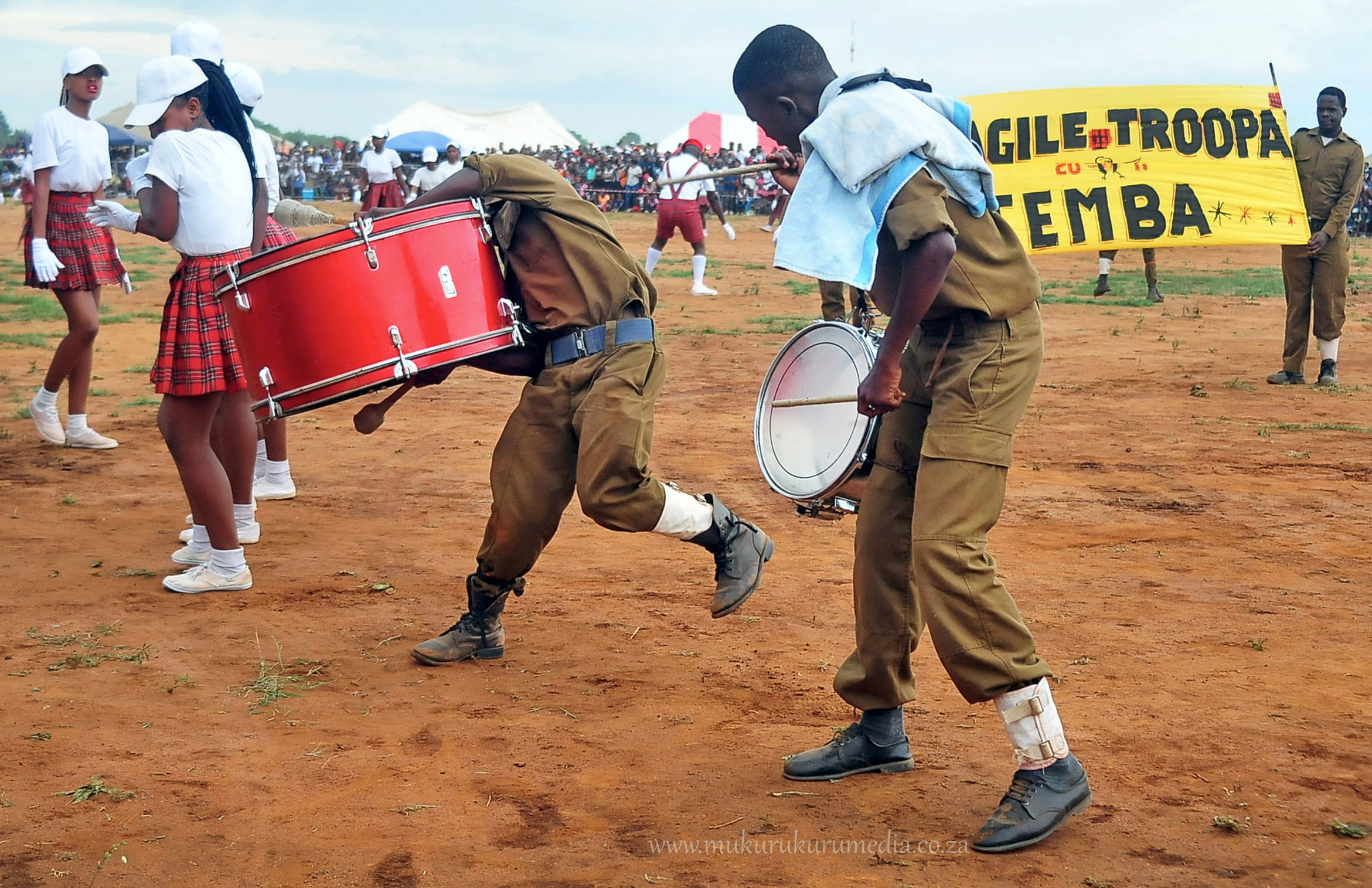 Members of the Reagile troupe commonly known as turupa perform during the annual diturupa carnival in Makapanstad in North West Province, South Africa. The event celebrates the exploits of African men who were conscripted on the side of the Allied Forces during World Wars I and II. Photo: Lucas Ledwaba

BY resolution 59/26 of 22 November 2004, the UN General Assembly declared 8–9 May as a time of remembrance and reconciliation and, while recognizing that Member States may have individual days of victory, liberation and commemoration, invited all Member States, organizations of the United Nations System, non-governmental organizations and individuals to observe annually either one or both of these days in an appropriate manner to pay tribute to all victims of the Second World War.

IN the 1970s and 1980s visual artist and activist Thami Mnyele compiled a number of essays reflecting his keen observations on the state of visual arts in South Africa at the time. His astute points offered a refreshing outlook on the complexities that belied contemporary art at the time.
Judy Seidman1, artist and Mnyele’s fellow MEDU Art Ensemble member reminds us of the previous forms of access denied to black artists for centuries.
Seidman also states: “Art that transforms our world never emerges from a vacuum.” 2
One can relate to this statement by simply considering how the diturupa cultural movement has developed through the decades.
Troupes travel to Makapanstad in the North West province of South Africa for an annual carnival held on the 26th of December. Locals are treated to a festive display of performances by the troupes kitted out in their best military regalia and uniforms, showcasing complex photography. What makes this carnival unique is that the performers are continuing a legacy of honouring a part of South African military history that is largely unknown and under-represented.
Over a century ago, numerous African men recruited with the assistance of local traditional authorities left this village as well as others in the vicinity to serve their country as part of the SA Native Labour Contingent. Upon return, some of the men began teaching locals the European military drills they had learned. Eventually this birthed diturupa, a cultural movement that saw the unlikely fusion of these drills with African dance and musical compositions. In contemporary times, diturupa continues to attract sizeable audiences and the throngs of crowds bear witness to a unique form of performative archiving.
While this form of archiving is not a new phenomenon, the intersection of rigid and stringent military drills with the flair, flamboyance and unbridled nature of ‘traditional’ African dance forms is intriguing. The poetry of it all is symbolic of the symbiotic nature of African creative expression and its connection and communion with nature in some form or another. The preservation and interpretation of this history is anchored in forms of remembrance that appeal to complex community emotions.

First SA poet laureate, author, philosopher and scholar Professor Mazisi Kunene 3 writes: “It comes within its inner meanings, thoughts which seem simple but grow more and more complex as one probes deeper into their hidden systems. In the discovery of these meanings lies one of the most amazing experiences one can have.”
By invoking the memories of their forebears these troupes find ways through which they can keep retelling this story for generations to come. The stories live in songs composed, in the beating of the drum and in the choreographed dance moves. Kunene’s description is apt, stating that “the central strategy of African society makes oral literature a crucial tool for its consolidation. The spoken nature of the literature further guarantees the widest circulation of the communal ethic and history”. 4
“As preservers and interpreters of history great oral poets (izibongi) have the power to confer immortality. This has deeper religious and philosophical significance in a society in which conceptually past generations continue to play an important role in the destiny of the present society.” 5

Photojournalist and author Lucas Ledwaba has an extensive body of work that documents diturupa. As someone with a vested interest in history and a deep desire for Africans to tell African stories the African way, he has spent a significant amount of time telling this particular story through an alternative lens. What may easily be superficially interpreted as just another African carnival has found new life in the photography of Ledwaba. Through his unequivocally expressive imagery that
remains attuned to the marches of the late African soldiers whose lives were lost aboard the naval vessel SS Mendi on 21 February 1917, Ledwaba invites the viewer to engage with this enigmatic visual feast. Images captured articulate more than what the performers are communicating through dance-infused drills – an ode to ancestral presence and spiritual connection. Capturing every contortion of the body, each close-fisted salute gesture and each flick of motion, Ledwaba’s uncanny ability to meticulously depict the performers translates into poetic imagery. As a cultural activist profoundly moved by the largely unrecognised heroic legacy of returning African soldiers, Ledwaba’s foray into documenting diturupa is a jolting reminder of the need for further exploration into the annals of South African military history. Manifesting into a strong body of work, his specific engagement with this particular void in artistic interpretations of African tales and historical experiences offers an insightful perspective on the power of photography as a medium. This body of work remains highly relevant for contemporary stakes within the visual arts and heritage sector of South Africa. The works advocate for alternative strategies and ideology in terms of the preservation and interpretation of cultural knowledge production.

A distinguishing trait of Ledwaba’s diturupa images includes a style and technique that is unmistakably intertwined with intricate engagement with ‘the photographed’. The practice of a complex ideology creates visual interplay between the spirited and spiritual performances and Ledwaba’s eye. Reverberating in the sound waves emanating from the beating of the marching bass drum is revolutionary cultural expression and praxis that finds life through this communal performance. One wonders to what extent these troupes ground their cultural expression in studying and admiring the rich heritage passed on from returning African soldiers. When viewing this body of work, one gets the sense that Ledwaba’s aesthetic approach to the documentation of diturupa is supported by a full appreciation for the rich tapestry of these performances. Channelling their forebears’ experienced drills through their contemporary dance forms, the troupes offer much more than what is visible to the naked eye, or rather, to the viewfinder and lens. Contemporary stakes and visual narratives.
One hopes that Ledwaba’s work will offer cultural signifiers, i.e. markers which audiences read with specific meaning. By calling for a re-reading of South African military history, the cultural movement that is diturupa (through Ledwaba’s photography) gains longevity. The honesty, vibrancy and dignity emanating from each image captures signify an important non-negotiable imperative: visual images
carry a function, which in this instance, is to contribute towards sustaining the legacy of the WWI forebears who returned to the villages to share their experiences.
Functionality is conveyed through the riveting nature of the work, creating an extension of the performances layered within. Ledwaba’s artistry subscribes to what Thami Mnyele referred to as “the principle that governs African traditional art, namely that form follows function”. 6

Here Ledwaba’s observations have resulted in pivotal artworks charting into unknown territory. A photographic inquiry that essentially sheds light on a specific cultural movement, Ledwaba’s diturupa images emphasise the view that contemporary art forms and art practitioners cannot afford to assume a detached role in composition.
“For me as craftsman, the act of creating art should complement the act of creating shelter for my family or liberating the country for my people,” notes Mnyele.
Ledwaba’s body of work offers conscious cultural engagement and demands that South African cultural practitioners step up to the task of continuing to challenge, question and disrupt existing historical narratives. Not allowing anything to impede his work, Ledwaba has realised that this body of work is a vital for the development of contemporary photographic practice. By leaning on a particular ideology that frames and directs his creative impulse as artist, Ledwaba is able to transcend the limitations of a typical white cube platform. He continues to create methodologies of engagement with the communities with which he interacts, that are designed to give further insight
into the foundations of communal creative expression.
Using photography he is able to capture specific moments in time and give them new life through his practice. His is a role as artist that provides a new lens on villages which were once desolate horizons that come alive with thunderous performative vociferations at the injustices suffered by the forebears of generations presently residing there.
Through visual language his photographic works translate the “spiritual intercessions” observed by cultural expert, practitioner and author Dr Lebogang Lance Nawa in his descriptions of diturupa. One hopes that these images will continue to inspire further inquiry into the elements of diturupa as a cultural movement. One hopes that these images create a portal through which present and future generations are able to reflect on experiences and concerns with a view towards continuation and preservation of this performative archive.