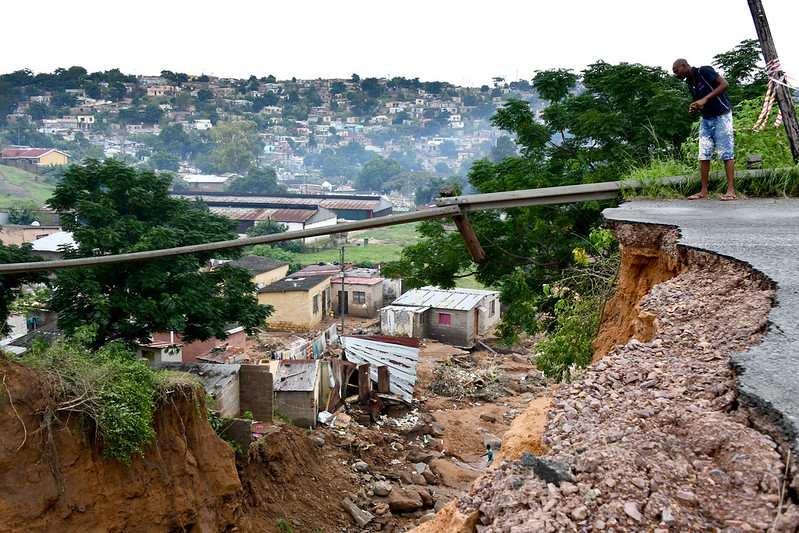 The province of KwaZulu-Natal was ravaged by floods last month leaving more than 400 people dead and scores missing. Now those displaced by the floods face further challenges. Photo: GCIS

NOT even a month after being flooded out of their government shacks at
a Lamontville transit camp, flood victims who have been sheltering in
Wema and Tehuis Hostel’s community hall have been ordered by their
ward councilor to move back to the remains of their ravaged ‘homes’.

For the majority, this was not the first time they had lost everything
in the ever-more-frequent, ever-more-violent storms that are hammering
KZN’s east coast. Former residents of Mega Village informal settlement
located on the banks of the Umlaas Canal behind the Mega City shopping
mall, many had lost everything during the floods of April 2019.

Subsequently housed for two years in ‘temporary accommodation’ – a
tent at Tehuis Hostel – in March 2021 they were dumped in a hastily
constructed transit camp that sprang up almost overnight next to the
much larger, older transit camp in Lamontville’s Gwala Street, a move
seemingly motivated as punishment for persistently asking too many
questions about the hundreds of millions of rands that had been
previously allocated to the municipality for flood relief – including
housing – and which apparently failed to reach many of those most in
need.

During a June 2019 media briefing, COGTA MEC, Sipho Hlomuka had
announced that: “…some of the storm victims are accommodated in
shelters, owing to the fact that they cannot be returned to the areas
they lived in because the land is not suitable for habitation (due to
being prone to flooding).  Others had their homes completely
destroyed. We are aware that the city is hard at work at identifying
suitable replacement land for them.”

“…[A]n amount of R90.8-million has been made available through the
approval by the national Department of Human Settlements for eThekwini
Metropolitan Municipality to expend: R3-million on 772 transitional
housing units; R1-million to assist 3017 households with building
materials to rebuild their homes; and R3-million for relocation costs
where it is deemed necessary,” reported Hlomuka at the time.

From this ‘support’ the Mega Village flood victims seemed to have won
the booby prize – the euphemistically named ‘transitional housing
units’ or amatins, which they said were far worse than their tent at
Tehuis as the transit camp had no washing facilities or access to
electricity and water had to be drawn from a single shared tap. As the
units flooded during the recent deluge, residents were forced to
evacuate and flee to safety at nearby hostels’ halls.

Flood victims sheltering at Tehuis and who had been without water and
access to electricity since the 11 April, were gifted loaves of bread
and cooldrinks by Gumede and her entourage which included Cooperative
Governance and Traditional Affairs minister, Nkosazana Dlamini-Zuma. A
few days later Gumede arranged for the delivery of blankets,
mattresses and a few other small items – rubbish bins, plastic basins
and ironically, an electric kettle.

According to those present, during her state visit, Gumede announced
that the former Mega Village / Tehuis / ‘new’ Lamontville transit camp
refugees would not be sent back to their dreaded tin houses, but would
stay at the hostel halls until they received proper permanent houses.

It was reported that Human Settlements Minister Mmamoloko Kubayi had
declared that R143 million had been allocated to help residents of
Durban’s informal settlements repair their homes. Kubayi said families
would receive vouchers to a maximum of R8 000.

On 25 April, KZN premier, Sihle Zikalala proclaimed that 4 396
“temporary accommodation sites” would be provided “from the end of the
week” in order “to accommodate families that are currently
accommodated in community halls, churches and schools.”

Media reports have suggested that some of these sites may also be
located in the iLembe and Ugu municipalities, a vast and costly
distance from schools, hospitals, workplaces and other city amenities
previously accessible to the refugees. And once moved to another
municipality, it is unlikely eThekwini officials will bother
themselves further with their fate.

During interviews with international reporters, many flood victims
bemoaned the lack of government support. One visibly traumatised
woman, who told of a child swept away at Mega Village in floods back
in 2012, said, “Where is our councillor? She is not here with us.
Although we voted for them, now the people will know that our leaders
are useless.”

Back at the Wema community hall, flood victims also cornered
government officials, including the eThekwini mayor, Mxolisi Kaunda,
during a walkabout and described their suffering without dignified
safe accommodation – accommodation they had been promised by various
administrations for more than a decade.

Yet once again, ANC representatives have proved utterly indifferent to
the anguish of the poor.

Recently, ward 74 ANC councilor, Nolubabalo Mthembu allegedly
instructed the more than 100 flood victims who are still sheltering at
Wema and Tehuis to leave the halls and return to their Lamontville
transit camp.

Not only have their units and the few possessions they were forced to
leave behind when they evacuated been damaged or destroyed in the
floods, but the camp is low-lying near the Umlaas Canal and –
obviously, given the latest disaster – prone to flooding. They might
return only to be swept away in the next flood, which could be next
year, next month or tomorrow. And they are left considerably worse off
with each flood.

But even more sickening is that residents claim that Mthembu
accompanied electricity inspectors to the then ‘new’ Lamontville
transit camp back in July and August 2021 at which time she was
allegedly informed that the units had been constructed right on top of
high voltage electricity cabling (they even marked out where some of
the underground cabling was laid), that human habitation should never
have been built there, that it was extremely dangerous and that the
residents had to be relocated immediately. That was eight months ago
and the area has since been inundated – it does not take a genius to
work out that water plus electricity can be lethal.

According to the residents, at the time, Mthembu dutifully promised
the inspectors they would be moved, then went away, only to be
glimpsed again around election time and then some considerable period
after the April floods when she accompanied a private donation made by
Engen that had apparently been facilitated by members of Black Sash
for the flood victims at Wema and Tehuis. At around this time Mthembu
allegedly accused one of the former transit camp leaders of “exposing
her to Inkatha.”

Mthembu allegedly claimed that once they have returned to the transit
camp swamp, she will “talk to the municipality officials and see how
they can assist them.”

To date, the flood victims have refused to move. As everyone knows, a
transit camp is not temporary accommodation – residents rot there –
and saturated, flood-prone ground in which high voltage cabling is
buried just beneath the surface is a death trap. But perhaps that is
the intention.