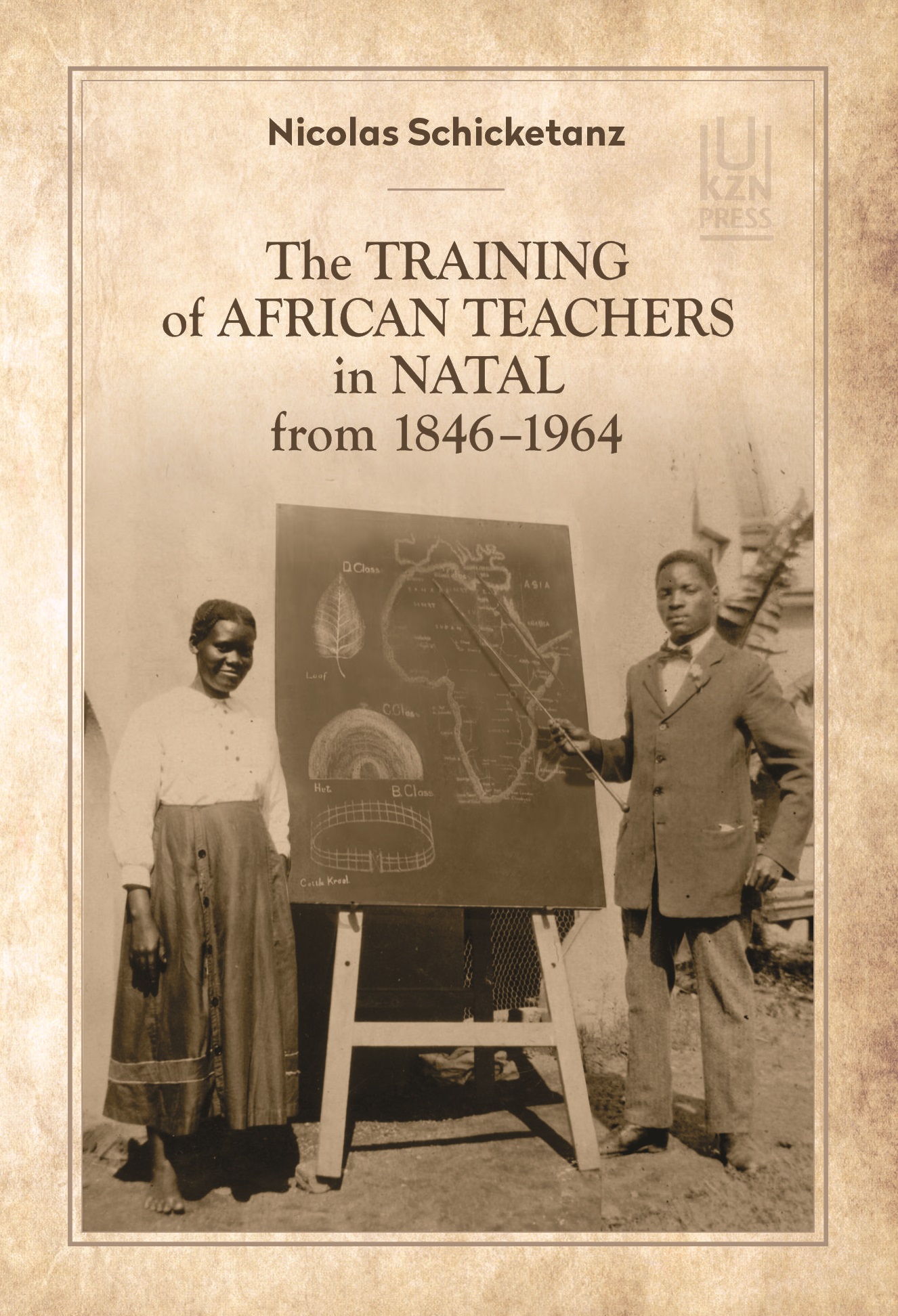 Author and scholar Nicolas Schicketanz traces the training of teachers and introduction of formal western education in Natal back to the 1800s. In this excerpt from the book The Training of African Teachers in Natal from 1846-1964 explores the attitudes of missionaries towards African teachers.

But the training of African teachers was hampered by other factors in addition to the failure of the missionaries’ attempts to establish formal training programmes. Steeped in notions of white supremacy, the missionaries saw Africans as having the potential to serve as second rate teachers at best. While in some cases they praised the African teachers for their abilities in the classroom,63 the missionaries saw Africans as fundamentally inferior to whites in both their intellectual and moral capacities. As the American missionary Aldin Grout put it in 1852: The people for whose good we labor, are passing through a transition state. They are taking the first step out of barbarism . . . Having risen a little above their former filth, and put on garments in imitation of white men, they imagine themselves white and clean every whit; and they say so to their old companions. Imagining themselves white, they would seem to regard themselves as belonging to the white race, possessed of all the intelligence, judgment and wisdom which they suppose the superior race to possess. Acting under such impressions, in their ignorance and pride they actually commit black deeds, instead of white, and then turn black again; at least some do.

The Anglican missionary Robert Robertson also expressed his view that Africans were intellectually and morally inferior. He stated that African teachers would ‘no doubt be imperfect and ignorant’ and that ‘the native [is] behind his English brother in attainments’.

John Colenso thought along similar lines and instead of relying exclusively on African teachers he employed specially educated and selected missionaries from England, as well as white laymen whom he considered capable enough, with the intention that they would spread across the colony as teachers of the Africans.66 The missionaries of the American Zulu Mission also demonstrated a preference for white teachers. Only one year after they had employed their first African teacher in 1846, for example, they requested that more white American elementary teachers to be sent to Natal.

There was thus a clear ambivalence on the part of the missionaries towards the idea of Africans teaching at all, which inevitably dampened their enthusiasm to establish viable formal training programmes.

The Training of African Teachers in Natal

The demand for teachers increases While the attempts by the American Zulu Mission and the Anglican Church to formalise and consolidate teacher training in the 1850s had failed, in the 1860s the demand for formal schooling from both the amakholwa communities and the broader African community beyond the mission stations began to grow. This demand quickly outstripped the capacity of the mission schools. As the American missionary William Ireland wrote:

Heretofore we have found one of our greatest discouragements, not merely in the apathy of the heathen around us in regard to instruction, but in then decided unwillingness to receive it, in our schools or elsewhere. In this respect a great and happy change has taken place in the minds of many; and we believe that this change will, every day, become greater

and more general. We are seeing and enjoying an intellectual revival, and have strong faith that this will, in due time, be

followed by one of a spiritual character. We suppose the great superiority of most of our converts over the uninstructed is

beginning to make the latter feel that they must advance, or be left shamefully behind. The blindest among them can now

see that knowledge is as truly power in the case of a black man as it is with the white.

By 1863, the amakholwa community at Umvoti had hired their own teacher – an English colonist – at £75 per year and the community at Amanzimtoti was paying the son of a Scots Presbyterian minister £45 per year to teach their children. As the American missionary Hyman Wilder wrote in 1864, the issue of training African teachers has been long before us, but I fear we have never realized its full importance. That importance is now thrust upon our thoughts, by the great number of children from among the heathen who are willing and wishing to be taught. We have no native teachers to enter the field thus thrown open to us, and we are quite unable to perform, ourselves, the great amount of teaching now demanded. The great cry is for teachers.

At the same time that the mission schools were experiencing a growing demand for school teachers for teaching African children, the Natal colonial government, which had involved itself minimally in the educational work of the missions, began to take a more active interest in the education of Africans. During the existence of the Boer Republic (1839–1843), formal education had been available only through the American Zulu Mission and the Dutch Reformed Church or by private arrangement. After the British annexed the Boer Republic in 1843 and established the Colony of Natal in 1856 this situation did not change significantly.

Nevertheless, underfunding of the missions was so alarming to the Lieutenant-Governor of Natal, Henry Cooper, that he instituted legislation to provide a stronger funding base for, in particular, the educational undertakings of the missions. Ordinance No. 2 structured the educational provision for most of the African population so that it was managed by the missions, with oversight and partial funding by the colonial government. This funding was allocated from the hut tax – a tax which was levied on Africans not living in a ‘civilized’ house73 – which generated revenues of about £10 000 a year. A fifth of the tax – roughly £2 000 – was earmarked for African education. In 1857, the Native Reserve Fund allocated £5 000 for subsidising African schools – although the full amount of the fund was not spent until 1861. In order for a school to qualify for a subsidy, it was required to follow a prescribed curriculum – which covered English, arithmetic and industrial skills – report regularly on their spending of government funds and be willing to undergo inspection at any time.76 A Board of Education was established in 185877 and in 1859 a Superintendent of Education was appointed whose role it was to report on the state of schools (black and white), approve subsidies to schools, visit and examine the schools once a year, appoint, dismiss and examine the teachers, regulate courses of study and approve school books. This was virtually an impossible role, and consequently the position of superintendent was more symbolic than anything else. African education had, however, for the first time in Natal’s history, been clearly defined as a function of the colonial government. Despite this, the education of African children remained neglected: the government established no schools for African children and only in 1864 did it begin to inspect the existing mission schools. By 1865, the government subsidised 34 mission schools which had a combined enrolment of about 1 700 African pupils. This number would rise to about 191 subsidised schools with around 11 000 pupils – which included schools in Zululand – by 1903.

Two boys’ government secondary schools were opened for white children in Pietermaritzburg (1863) and Durban (1866). The colonial government recognised a similar need for African boys. Robert James Mann, the first Superintendent of Education of Natal, recommended in his first report on African mission schools in 1864 that the government establish a ‘central school’ in Pietermaritzburg for African boys – an idea that was supported by Shepstone. This school would provide secular secondary education to African boys sent by the traditional African authorities who, after completing their education, would return to their communities to teach what they had learnt.

Had this school been established, it would have made the training of African teachers a government responsibility, beyond the control of any religious body. However, the plans did not materialise due to the opposition of the white colonists to allocating funds to African education. Having advocated unsuccessfully for direct state control of African teacher training, as a less costly alternative Mann – and later his successor, Warwick Brooks – sponsored three mission schools to serve as Central Training Schools: Amanzimtoti Institute and Inanda Seminary – both schools of the American Zulu Mission – and Pietermaritzburg Training School, a school of the Free Church of Scotland. The requirement that these Central Training Schools focus formally on the training of African teachers represented a challenge to the informal and unregulated ‘teacher-apprentice’ and ‘evangelist-teacher’ models that were typically used by the missions. In addition, Mann and Brooks expected that the teachers produced from these three government-approved training programmes would staff schools at all of the mission stations and elsewhere – challenging the denominationalism that had characterised the education provided by the mission stations until this point.

The American Zulu Mission’s Amanzimtoti Institute, which had been closed in 1860, was re-opened in 1865 as the first governmentsubsidised Central Training School in the colony. By subsidising the mission-run school, Mann was able to bring his influence to bear to secularise the education of Africans without the heavy financial investment that would have been required to establish and run a government school. After consulting with the American Zulu Mission on the organisation of the school,88 Mann offered the mission a subsidy of £100 per year to enable it to provide its scholars with a ‘more careful and complete training as teachers.’90 In addition to the funds provided by the mission and the government, an additional £100 of the institution’s budget was raised by the missionaries themselves by means such as charging tuition fees.91 Thus, while the training school was not a government school and the role of the government was limited to its initial role in establishing the institution and the £100 it provided annually, the Amanzimtoti Institute did represent a new model of African teacher training which came under government supervision. Despite its limited role, however, the involvement of the colonial state in the seminary had a significant impact in terms of secularising the training of the institution’s students through its curriculum requirements. The American missionaries began to record the number of African school teachers employed on their mission stations at the end of the 1860s. In 1875 they separated the teacher training programme more distinctly from their secondary schools and theological training programmes – which until then had had some overlap. In 1882 – when the number of African teachers employed by the mission had risen from around 25 to 43 in two years – the mission instituted a week-long Teachers’ Institute – a refresher and inservice training which was attended by 27 of its teachers.