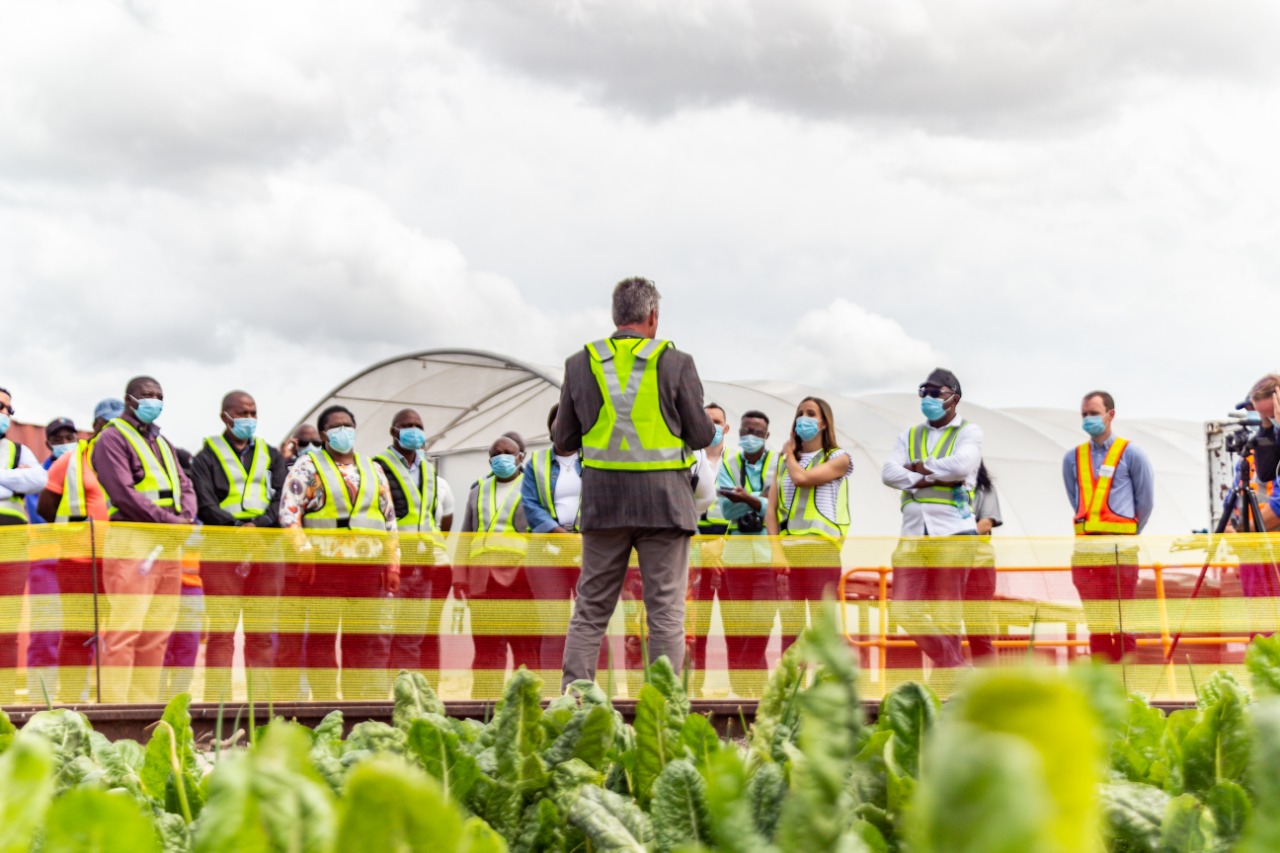 THE SA Breweries will be developing a commercial drip irrigation system, that will help a local business sustainably grow spinach in raised beds.

The unique value of Project Imifino, is that the water and nutrient requirements of the crops are fully provided for by the wastewater generated in the brewing process, with no requirement for additional water or fertilizers.

The losses from production normally become a waste management liability for a business and, all too frequently, society or the receiving environment.

In SAB’s unique approach these nutrients can be transformed into a new agricultural product. This turns a potential loss into a sustainable business with a literally green product – true circularity in action.

“Through Project Eden we were able to double our impact to reduce our internal water consumption, and can now provide a source of food and income to our local community,” said director of Agricultural Development at SAB, Josh Hammann.

“We will be supporting the operation of TMWS for the first 12 months through the construction and commercial establishment phase, and have offered additional technical and business coaching with the assistance of our Supplier Development Team, after which it will become self-sufficient,” said Hammann.

To comprehend the depth of impact of Project Eden, and in its wake Project Imifino, one needs to travel back to 1998, when Martin Davies of Rhodes University was involved in conceptualising the innovation when it was first presented to SAB.

The idea was well received 23 years ago, but it was “born” a little ahead of its time, since it was 10 years later in 2008 that SAB made an initial investment of R1 million towards Project Eden.

Over the following 13 years, Prof Cliff Jones from the Department of Ichthyology and Fisheries Science (DIFS) at Rhodes University has led this research and development as a joint project with SAB.

In collaboration with crop scientists from University of KwaZulu Natal and with financial support from the Water Research Commission (WRC), they developed and tested these innovations on experimental and pilot scales.

Project Imifino is the next big step; it will provide proof-of-concept of the work on a full commercial-scale for the first time.

The team, led by Rhodes University’s DIFS, recovered water from brewery effluent using high rate algal ponding (HRAP) and constructed wetland (CW) technology to recover the water and to harness the nutrient potential that was locked in the effluent.

This was done through various applications including aquaculture, hydroponics, algal biomass production and agriculture.

“This is the triple helix at its best. SAB is leading the way for the sustainable use of our limited water resources while creating significant and tangible social benefits through the incorporation of the circular economy and water energy and food nexus principles,” says Dhesigen Naidoo, CEO of WRC.

It did not take long before the concept of using effluent treatment to produce food and to create jobs evolved into secondary applications of water prior to its release, through environmentally sustainable approaches.

SAB and Rhodes University (with funds from the WRC, the National Research Foundation, and then Department of Agriculture, Forestry and Fisheries) has produced two PhD and five Masters Students as part of Project Eden. One of these students was Mr Richard Taylor, the Director of Project Imifino’s TMWS, and another was Mr Sean Power, AB-InBev’s Technical Expert in Water and Effluent Treatment.

Project Imifino grew out of Project Eden and creates an intermediate water user (the spinach beds) which reduces the nutrient concentration of the water, improving its quality to the extent that more water, of a higher quality, is available to be recovered for reuse in the brewery.

The Spinach beds really only “use” roughly 10% of the water flowing through it, with 90% still available for reuse. The crops primarily utilize the nutrients in the water and thus Project Imifino serves as a treatment where the water is supplied to the spinach beds which then remove the nutrients while growing, thereby cleaning the water.

This “polishing” of the water allows the brewery to recover more water through its water recycling plant, which further helps to improve the site’s water efficiency. The beauty of the system is creating a brand-new output (spinach) with no additional water requirement in the catchment, and improving the brewery’s water use through improved water quality and reuse potential.

“What began as a project to treat our water has become so much more. This is not only the first fully green biological treatment system for a brewery in Africa, it is a platform for the continuation of research and development at Rhodes University, and a source of job creation worth R2 million of downstream value per year,” said Hamman.

The benefit around maximizing the efficient use of natural resources is critical in a water scarce country like SA, and what we are demonstrating is the pairing of complementary processes and water users in order to maximise the local benefit of water.

With this approach we can use the water to make beer, thereafter TMWS reuses it to grow crops and then we reuse what remains in our recycling plant for cleaning and utilities applications. Each process provides benefits for the other: the brewing process provides the organic waste and water, which becomes the nutrient source & irrigation for the crops. The crops take out the nutrients, and use a small fraction of the water while cleaning the rest, and then the clean water is suitable for processing in our recovery plant to be reused once again in internal operations.

Published in Our Stories and Uncategorized