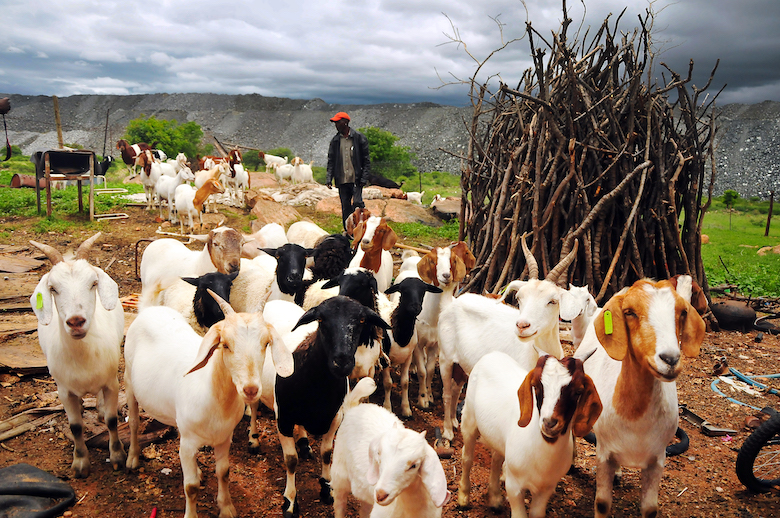 The Matjiu family livestock will be sold and the money given to them. Anglo has bought two commercial farms for the community. Photo: Lucas Ledwaba/Mukurukuru Media

The extractives industry is notorious for its negative impact on the environment and host communities. With investors waiting in the wings to cash in on Limpopo’s mineral wealth LUCAS LEDWABA asks if the provincial government has adequately prepared communities for the radical changes that will come about as a result of mining?

IN its report on socio-economic challenges facing mining affected communities the SA Human Rights Commission makes the point that “many mining-affected communities continue to experience significant levels of poverty and systemic inequality, which reinforces the notion that the benefits of mining operations disproportionately favour mining companies and the State, and are often to the detriment of local communities.”

The 2016 report titled National Hearing on the Underlying Socio-economic Challenges of Mining-affected Communities in South Africa, further notes that “despite extensive regulation and notable attempts by mining companies and government to implement progressive and sustainable projects, current industry practice is characterised by inconsistent legal compliance and reflects concerning legislative gaps.”

The provincial government which hosts an Investment Conference this week has laid bare its plans to welcome massive investment from mining companies as it seeks to grow its economy.

The annual conference which opened at The Ranch Hotel near Polokwane on Wednesday, brings together the private sector, government and industry “to attract investments and pave the way for nurturing and supporting industrialisation in Limpopo and enable the province to thus make a substantial contribution to the provincial economic investment drive.”

In their address to the conference premier Chupu Mathabatha and president Cyril Ramaphosa waxed lyrical about the province’s massive mineral wealth and its potential to grown the province’s economy.

The growth of the extractive sector in the province will no doubt change the landscape and dynamics of an area which has until recently thrived on agriculture and tourism. Besides commercial agriculture, Limpopo which is 85% rural also boasts a growing and vibrant tourism sector and substantial small scale and subsistence agriculture economy.

The recent results of the Quarterly Labour Force Survey (QLFS) for the second quarter of 2021 by the Statistics SA provide a sobering picture of the country’s unemployment situation. Mining investment into a province like Limpopo will surely make a difference to the figures contained in the QLFS.

In a sparsely industrialised province such as Limpopo where job prospects are generally limited, the unemployment bloodbath is even more severe. Perhaps the growth of the mining sector could provide some answers.

However, the prevailing situation in SA has exposed major shortcomings in the impact of mining on communities. These have often resulted in opposition from host communities, conflict and lengthy court litigation as is the case for example in the Somkhele area of KwaZulu-Natal where the community is opposed to the expansion of coal mining operations owing to its negative impact of the community.

Some of the conflict has pitted community members against one another based on those for and against mining development. These cases are detailed in a report by Human Rights Watch titled We Know Our Lives are in Danger – Environment of Fear in South Africa’s Mining Affected Communities.

The 2019 report notes that “people living in communities affected by mining activities across South Africa are exercising their human rights to freedom of expression and peaceful assembly to advocate for the government and companies to respect and protect community members’ rights from the potentially serious environmental, social, and health-related harms of mining. However in many cases, such activism has been met with harassment, intimidation, or violence.”

They cite among others, the impact of the project on the environment, possible relocation and desecration of graves and tampering with other significant religious, cultural and spiritual factors. Central to most opposition to mining is the loss of land for grazing, farming and the sentimental attachment to ancestral land.

This scenario repeats itself in many parts of the country where companies are seeking to exploit the mineral resources from the land.

The mining boom in rural areas has also resulted in other ills, mushrooming of informal settlements, rapid population growth, poor and inadequate housing and amenities, which in turn have led to other vices including crime and prostitution among others.

These are some of the factors listed in the final report of the Marikana Commission of Inquiry by judge Ian Farlam, as the contributory factors to the volatile situation that led to the Marikana massacre in August 2012.

In the aftermath of the massacre government appointed an inter-ministerial-committee to revitalise 15 towns in distressed mining communities in Limpopo, Gauteng, North West, Mpumalanga and Free State.

Seven years on little has changed in these towns, which include the towns of Steelpoort and Burgersfort in Limpopo. In fact they continue to be afflicted by these challenges daily, as more people flock there in search of jobs and to establish businesses.

With Limpopo boasting many sparsely populated villages, the expansion or introduction of mining activities to these areas will no doubt lead to a massive culture shock as the dynamics there change forever.

As the investors wait on the wings to cash in on the province’s mineral wealth, the big question is whether the provincial government is sufficiently prepared to deal with the rapid population growth and resultant chaos?

Furthermore, is the provincial government taking proactive steps and measures to prepare communities to deal with the impending changes to their areas? It is inevitable that in some areas communities could have to relocate to make way for mining activity. Is there a plan, agreed upon with affected communities to make this process as little destructive as possible? If Limpopo hopes for mining to make a meaningful and positive contribution to the province, then government has to lay down a framework to prepare communities for the impending transition from laid back villages to operational mining areas.

As it’s often the case, a lack of proper consultation has left many communities feeling marginalised and shocked by sudden changes they were never prepared for in their villages.

In its 2016 report the SAHRC made this important point: “When underpinned by good governance and a respect for the community and environment in which they operate, extractive industries harness significant potential to transform a country’s social and economic development. Employment opportunities, increased investment and access to revenues can drive economic growth and reduce poverty at local, regional and national levels. However, often these opportunities are not realised and the negative impacts of extractive industries detract from and undermine the potential benefits and opportunities that accompany them.”

In its quest to grow the economy, reduce unemployment and create a vibrant SMME sector resulting from the mining boom, government needs to ensure it protects the interests and human rights of host communities.

Whether mining becomes a curse or a blessing to affected communities, rests with government to live up to its constitutional mandate of protecting and upholding the rights of its citizens. – Mukurukuru Media