Throwback to Ace Ntsoelengoe in Toronto 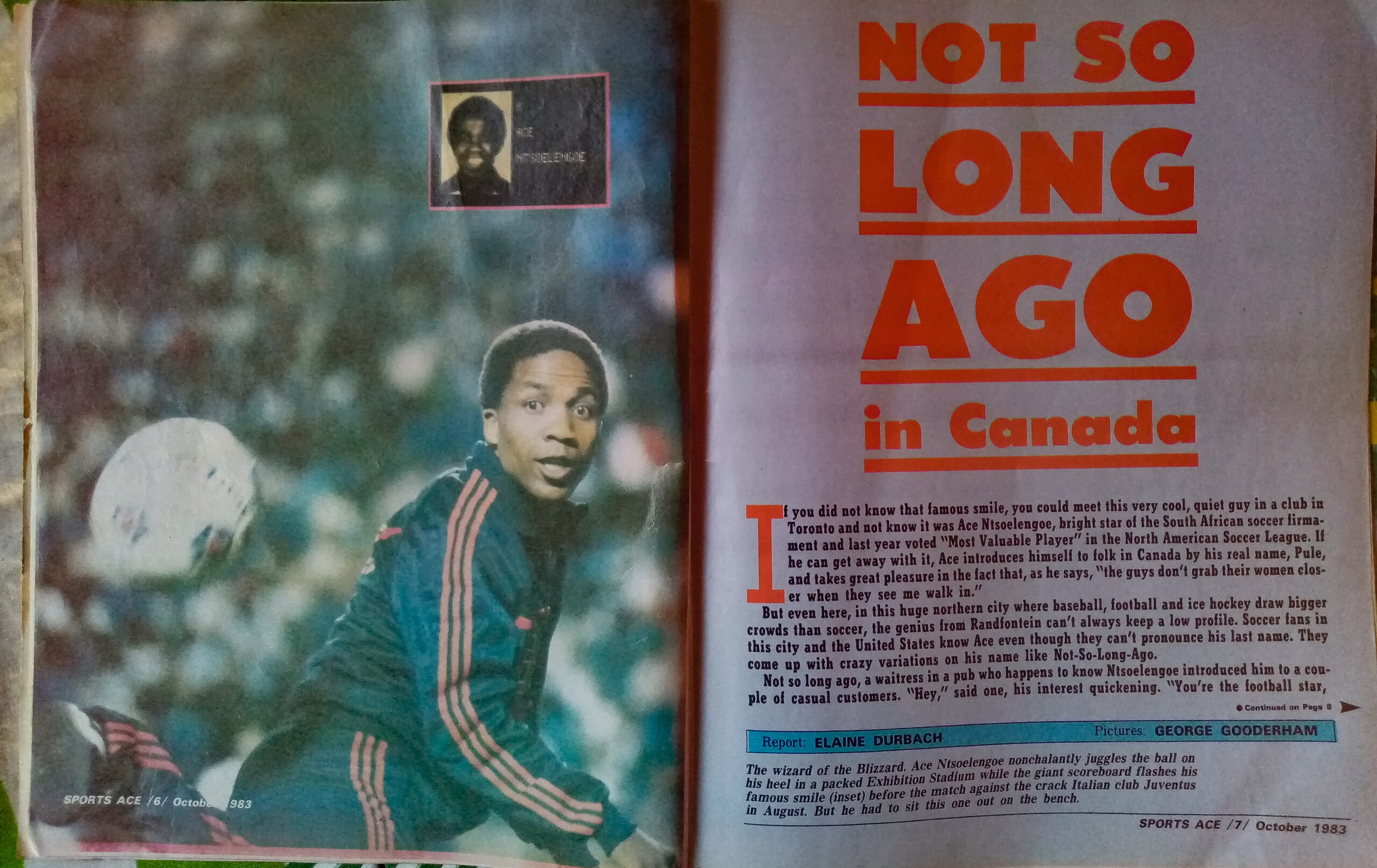 Spring has sprung and as SA celebrates Heritage Month we throw back to the past, to a different time, the best of times, the Aaaaaaace of times. As part of celebrating our rich heritage we dig into archives to bring you a feature on the legendary Pule Ace Ntsoelengoe’s life in far away Toronto where he spent many seasons flying the SA flag.

Such was his influence in the game in Canada that he was inducted into the North American Soccer League’s Hall of Fame among other world greats. Although the man ranked as the greatest SA footballer of all time passed on in 2006, memories of his prowess on the field are recorded for posterity.

In this piece published by the now defunct Sports Ace magazine in October 1983 – journalist Elain Durbach and photographer George Gooderham spent time with the legend in Toronto.

If you did not know that famous smile, you could meet this very cool, quiet guy in a club in Toronto and not know it was Ace Ntsoelengoe, bright star of the South African soccer firmament and last year voted “Most Valuable Player” in the North American Soccer League.

If he can get away with it, Ace introduces himself to folk in Canada by his real name, Pule, and takes great pleasure in the fact that, as he says, “the guys don’t grab their women closer when they see me walk in.”

But even here, in this huge northern city where baseball, football and ice hockey draw bigger crowds than soccer, the genius from Randfontein can’t always keep a low profile. Soccer fans in this city and the United States know Ace even though they can’t pronounce his last name. They come up with crazy variations on his name like Not-So-Long-Ago.

Not so long ago, a waitress in a pub who happens to know Ntsoelengoe introduced him to a couple of casual customers. “Hey,” said one. His interest quickening. “You’re the football star, right!”

Ace said “Yeah, I am.” He tried to leave it at that, but the buzz went around the room: “That’s Ace, who plays for the Blizzard.”

His cover blown, Ace finished his drink and left.

“But one of the things about Canada,” he says, “is not being known…at least, not by many people. Soccer fans recognise me, but not every person in the street pays the kind of close, constant attention which I get in South Africa. I have freedom here that I don’t have at home, where I can never really escape from the public eye.

“It’s not that I want to do something stupid here. I don’tget so drunk or anything. But I can go where I want and do what I want and no one pays any attention. I like it that way. I like to meet people one to one. I like to hear what they say even if they want to criticise the way I play. No, I don’t like crowds. When I go back to South Africa I will try to sneak out of the airport by a back exit! Last year there were about 800 people there waiting for me. Oh man.”

Ace is now 31 and has been a sports phenomenon since he joined Kaizer Motaung’s pro soccer team in 1969. For a guy who has always been fussed over and admired, living in a world of fast cars and beautiful women, he handles stardom well and prefers to introduce himself to strangers by his private name, Pule.

“I don’t like people to respond to ‘Ace, the Blizzard player.’ I want them to know me as Pule, the man.”

In the public spotlight he can be super cool. For this report he unselfconsciously posed in a street while the photographer flashed off shot after shot as passers-by stopped to stare.

But he won’t buy any attempts to team him up with a glamorous lady for a picture feature. In his book, that is too much like showing off.

Head coach of the Toronto Blizzard team. The ex-South African soccer personality Bob Houghton, says: “A lot of the guys who come over here find it difficult to handle the change of lifestyles. But Ace takes it all in his stride. He seems to be able to relax anywhere, anytime.”

“And he is very well liked.”

Comments a local sportswriter: “Ace isn’t exactly a bunch of hot quotes, but what a charming guy. Mind you, with that smile, he doesn’t really have to say a lot.”

Over a beer, Ace says: “I’m lucky. I play a good game of soccer and I smile a good smile. Lots of people can’t do either.”

The way he says it you believe that Ace is humbly appreciative of the gifts his maker gave him. It’s a slow, generous smile which can reach everybody in a room. It certainly reaches our blue eyed Irish waitress who flashes him her own appreciative grin as Ace gets to talking with warmth about his teammates.

His idol – yes, even the great Ace has an idol – is Robert Bettega, the Italian striker who joined the Blizzard this year. There are three other South Africans on the Blizzard squad. There’s Neil Roberts from Natal, Geoff Wegerle from Pretoria and David Byrne from Cape Town.

Ace talks a lot about loyalty but won’t say much about his love life. He has to endure plenty of good natured ribbing from his mates.Most of it, he brushes aside with a quiet smile.

“After a match, I go home and hit the sack unless I’m asked to go somewhere else,” he says as we ride in his ride in his brown Mazda to a team practice near Exhibition Stadium, with Ace threading his way through the traffic as smoothly as he can pick his way through a stubborn midfield.

Arriving at the stadium we bump straightaway into Ace’s buddy buddy and teammate Trevor McCallum, a black British player who has settled in Canada with his parents. He punches a hole in Ace’s early-to-bed story by telling me: “Actually, he gets out rather often.”

But then he agrees to go along with Ace’s image of the solitary guy with no women around, although Bob Houghton is on record as saying: “The impression I get is that Ace is extremely popular with the ladies.”

The Exhibition Stadium glows an eerie green – a combination of the bright lights and the artificial Astroturf. It is the worst surface in the league, according to Ace, and taking a slide means getting vicious skin burns.

But the practice pitch is real grass, lush and emerald, as is most of the vegetation around the city during the summer. In winter, when Toronto lies deep under snow, a black and white landscape that is frozen for months, Ace is always far away. He played one season of indoor winter soccer in Minnesota and swears he will never spend another winter in North America.

Ace does get a taste of the Canadian winter every year when he comes back from South Africa in February. But the Blizzard quickly head south to Florida for spring training in the sun.

It was down in Florida early this year that Ace tore a cartilage in his knee. He tried to play again a couple of times, but his doctor in Minneapolis (his base from 1976 to 1981) saw that the swelling meant trouble and advised surgery.

Ace underwent one operation, tried playing again, and had to have a second one. By mid-August he was still not in full action, though he insisted he felt absolutely fine. He was practising with the team and going for physiotherapy each day at a hospital.

“I’ll carry on going until I just forget about my knee,” he said. “Look the pain is only there – where the injury is. If you let it get over to your head, then you’re finished.”

On August 10 the Blizzard held the crack Italian team Juventus to a 0-0 draw. Ace was on the bench along with McCallum and Roberts, one of the team’s top scorers. A pretty French commentator who had watched him play on many occassions said she missed him.

“The dynamics would have been different if Ace were playing,” she said. He makes things happen. He can change the pace of a game.”

Seasoned teleision sports commentator Alec Bollini, watching the game at Exhibition Stadium, with Lake Ontario and its scattering of yachts in the background , agreed. “Ace is the most technical player in the team,” he said. “He is a very impressive player. Without him the Blizzard had to change their pattern.”

Garth Woolsey of the Toronto Star knew Ace when he played in Minnesota and watched him closely with his new team. A man who chooses his words carefully, he said: “Ace isn’t what I would call a flashy player. He does spectacular things, but very quietly, and makes them look easy. He has great natural talent, combined with a real sense of strategy.”

Bob Houghton puts it similarly. The ruddy-faced coach, with his flaring blond eyebrows and white blond hair, knew of Ace from the years he spent in South Africa as player-coach with the NFL team Berea Park.

Houghton, who went on to reach the European Cup final as Malmo’s manager in 1979 when the Swedish underdogs lost 1-0 to Nottingham Forest, is married to a Pretoria girl.

Like Ace Ntsoelengoe, they escape to the South African sunshine when the cold season arrives here. The well travelled Houghton rates Cape Town the most beautiful city in the world.

He rates African talent very highly too, and has been instrumental in establishing what local writers call the “South African connection.”

He says: “Ace has more than the skill that comes from playing with kids of all ages in the most difficult conditions since he was knee high. “He is a first class team player. Some guys get the ball and want to show what they can do with it. Ace sees what the team needs, and does it.

“Off the ball he works hard all the time for the team. He is an extraordinarily disciplined, intelligent player.”

“Hey, broth,” his teammates will greet him. And Ace returns the greeting with a brotherly grin.

Next season, Ace’s real brother Fonda plans to try out for the team. Ace isn’t laying down plans, but he foresees his brother staying with him – and certainly having a much easier time settling in than Ace had in this metropolis of seven million people.

When he got the contract with the Blizzard last year, after the Minnesota Kicks had been disbanded, Ace played alongside another South African great, Jomo Sono.

To Ace’s real regret, injury prevented Sono from returning to Canada this year. Without a hint of competitive sharpness, Ace spoke of how well they co-ordinate, and how great it would be to play together.

Jomo Sono, of course, turned his American connections into business ventures, and then channelled his earnings into team ownership. Ace, a little younger but coming closer to retirement age – he plans to retire at his peak- cooly outlines his own need to make sound financial investments for the future – in soccer, preferably.

How those money matters shape up will be determined in the next few months. Delicate matters, only hinted at by Ace, need to be settled, taking into account and Ace speaks with deep concern about this – the fans and their feelings.

“My life could be in danger if I make the wrong move,” he said.

One thing is for sure. His future does not lie in Toronto… TO BE CONTINUED…

Published in Our Stories and Sport