Silicosis trust pays out 100 miners but many more still waiting 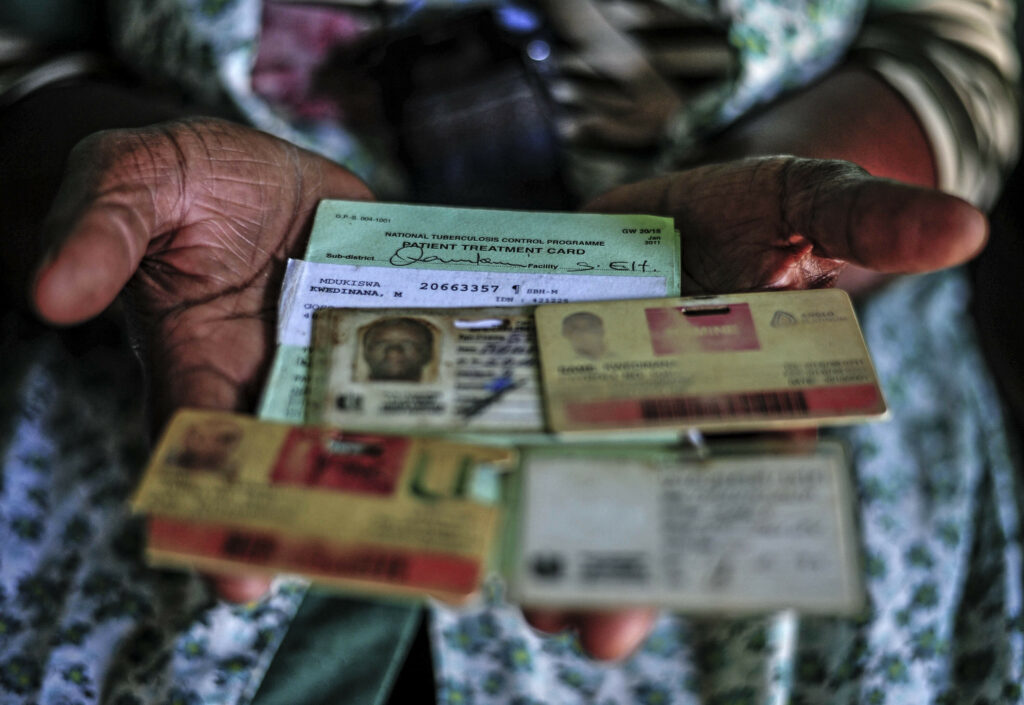 Mdukiswa Kwedinana's family only have his work clocking cards and clinic cards to show for his many years working on the gold mines of the Free State and Gauteng. Photo: Lucas Ledwaba/Mukurukuru Media

“Our concern is that people are dying and families will not get the benefits because the deaths could be listed as natural courses,” Justice for Miners campaign spokesperson Catherine Meyburgh said about the latest developments.

In a statement, the Tshiamiso Trust announced the successful compensation of about 100 gold miners with R9 074 523.80 of the R5 billion settlement amount being made to date.

According to the Trust, this follows “five-and-a-half months after the operationalisation of (our) claims management system on 20 February 2021.”

The Tshiamiso Trust was founded in terms of the class action settlement agreement concluded between six mining companies, some of their affiliates, the claimant’s representatives, and the claimant’s attorneys.

It was registered by the Master’s office of the High Court in February 2020 with the intention to commence the claiming process for payouts to affected mineworkers.

Its mandate is to pay compensation to thousands of ex miners who contracted silicosis while working on qualifying SA gold mines between 1965 and the time of the settlement and their beneficiaries.

The Justice for Miners (JFM) Campaign, an initiative by the Breathe Films and the South African Resource Watch (SARW) is not satisfied with the latest developments, citing the slow pace of the class action implementation and other operational issues that further slowdown and hinder adequate compensation of affected miners.

Amongst the JFM’s concerns is the manner in which miners are located in different parts of Southern Africa. “We believe more could be done to reach miners and their families effectively and efficiently,” said Meyburgh.

“We have a database that they (Tshiamiso Trust) can use and that we’ve offered to them but the offer has not been taken,” she said.

She further referred to chapters that can easily locate miners in remote areas for necessary application, however, “the Trust seems to be hesitant to partner with existing organisations that seek to support affected miners.”

The JFM also laments the seemingly limited resources from the Trust which could effectively reach affected miners. Adequate resources according to the JMF would ensure that affected miners are properly screened.

According to the JFM, issues such as adequate occupational health professionals need to be addressed and made accessible to claimants.

“We have raised several issues which we believe if addressed, can make the process more effective for miners. We have offered to assist the Trust find miners in their locations through our chapters; we have recommended the use of qualified occupational health experts to conduct benefit examinations – the use of local doctors and other service providers on the ground.”

Another burning concern from the JMF is that information is not easily made available to miners and is not communicated timely and adequately.

“The Trust deed makes provision for facilities, doctors, and funeral homes for the families to send their loved ones remains for proper assessment of the cause of death, but people are not aware that they can use these services.”

The JFM does not believe that stakeholders such as mining companies and the government are doing enough to monitor the Trust’s work and appealed for more close monitoring of how the compensation is being implemented.

On the other side of the coin, the Tshiamiso Trust has recognised the shortcomings in their systems and expressed appreciation of the patience from claimants for the time it has taken for compensation to finally commence.

“We deeply appreciate the understanding so many mineworkers have demonstrated and can only commit to work(ing) tirelessly to address concerns while we resolutely move forward,” said the Trust’s spokesperson Monako Dibetle.

Dibetle cites the among the challenges the complex court-approved Trust Deed to which it is required to adhere to; the eight-step process through which each claim must be processed; and the huge logistical and organisational cross border infrastructure that the Trust has had to establish – all exacerbated by the COVID-19 pandemic.

He said they have about 61 lodgement centres in five countries, 11 medical centres, six of them mobile, carrying out benefit examinations.

“Regrettably, there will be some claimants whose applications (become) unsuccessful,” said Dibetle.

He said applications become unsuccessful because either submitted medical records show conditions that are not compensable and that some claimants may be eligible for benefits from the government Medical Bureau of Occupational Diseases.

Dibetle said claimants whose applications are unsuccessful are entitled to request a review from the Medical Reviewing Authority the Certification Reviewing Authority, depending on the grounds provided for rejection. However, the JMF believes that they are not given enough access to be able to assist claimants during these complex processes.

“It is expected that we will see a steady flow of payments to claimants in the months and years ahead now that the requisite processes have been set up. As at 31 July 2021, 39 608 claims have been lodged since the claims lodgement process was opened in February.”

Tshiamiso CEO Daniel Kotton said: “We are gratified that the Tshiamiso Trust has reached a point in its development that the deserving gold mineworkers or their dependants, who have suffered so much, are beginning to receive the compensation to which they are entitled. We undertake to continue as rapidly as is humanly possible.” – Mukurukuru Media