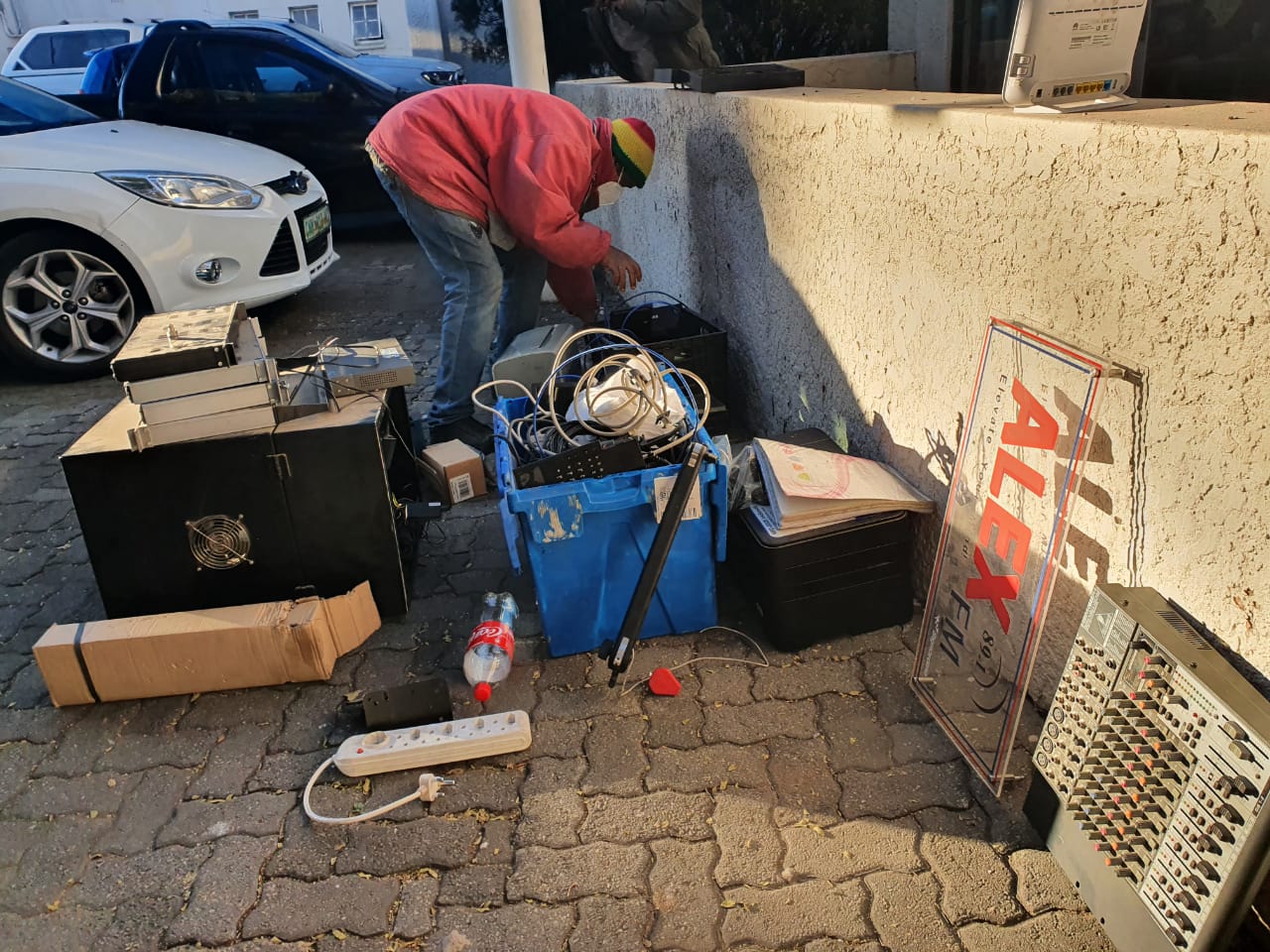 Community radio station Alex FM went off air this week after looters broke into its studio and made off with equipment estimated over R5-million. ISAAC MANGENA reflects on the impact of the destruction

It was heart-wrenching when I walked into no 18 Wessel road in Rivonia to find some employees of Alex FM standing there in shock and almost disbelief. This is the temporary home of the station whose studio and offices at Yarona Building at Pan Africa in Alexandra were destroyed and looted of equipment estimated at over R5million.
The technical team was going through stacks of rubble trying to salvage what was left of the studio equipment.

Further up the township the Pan Africa CBD resembled a war zone. The uncertainty was whether the businesses based there, which sustained the station through their adverts, would still be revived after wanton looting by rampaging mobs. It was encouraging that the team stuck together in the midst of this tragedy. At this moment they only have each other and the kind words and prayers from the community.
The team is very young, graduates from the impoverished township who depend on Alex FM to gain some radio skills while making some money for themselves and their families.
Alex FM has been the springboard, indeed a launching pad for most broadcasters and journalists now employed at mainstream stations. They include Lenny T at Thobela FM, Felix at Motsweding FM, Unathi Myoyo at Tru fm, Nosimphiwe Jikelele at Umhlobowenene Nomsa at Power FM, Busisiwe Ntombi who was at eNCA among others. Most of them were born and raised in Alexandra, while others came to the township for opportunities and made Alex FM their home.
Had this station been vandalised and looted during their time it would mean we possibly wouldn’t know about them. Their dreams would have been carried in rubble cleared by the cleanup campaigns organized when dust settled in the aftermath.
So you can imagine the piercing pain that went through these young aspiring broadcasters when they woke up on Monday 13 July 2021, to the news that the radio station they depend on for their dreams and livelihoods has been attacked and vandalized by the faceless spineless anarchists in the still of the night.
At the venue in Rivonia, I found the morning show team standing there ready to take to the airwaves. Eddyboy, Nthabiseng, Zinhle, Tshepo, were all there ready to serve the community of Alexandra.

They started at a now ransacked studios only to find the ruin inflicted by some members of their own community. Amongst others Themba, Josh, King, etc(add), were busy wiring, and laying cables on the roof to ensure the station was back up and community can be informed of the riots, the looting, etc.

This as the station manager was busy with interviews pleading, begging for assistance, any help from donors, business community, government, ordinary citizens, government. Radio 702 even used millions worth of their airtime to launch a campaign after an interview with the station manger Takalane Nemangowe, which saw many listeners and Primedia management, pledging lots of money to help resuscitate the station. The generosity of many people who pledge to donate was really amazing and heart-warming. We remain thankful as the community.
Alex FM is home to close to 50 staff members, whose livelihoods were threatened by the criminals who, not only vandalised and looted studio equipment worth almost R5million, but looted from the very same businesses that support the station through advertising and sponsorships.
It still boggles the mind that a right-thinking person who stays in Alexandra, would raid a community radio station. This is nothing but criminality which looked so well organized.

However what doesn’t make sense is, how does a “hungry” person climb to the 4th floor of Yarona Building at Pan Africa Mall to loot studio equipment, most of which is not suitable for home use?

Where were the police to protect important community site within Alexandra like the radio station, clinics, schools, libraries, even malls?
It is clear that whoever did this heinous deed has no interest of the Alexandra community at heart.
The station has been a permanent feature within the community and a pride of Alexandra for 27 years, and never once has it been attacked this way, even at a time when there were protests around where it broadcasts.

This is because most, if not all of the community know the value this community radio station brings. They know the importance of knowledge and information they get from the station.
They know that during times like this, when there are riots, violence, their radio station will keep them informed. They know that since lockdown started, and most were confined to their homes because of curfews, Alex FM has always been the reliable voice to give them hope, to teach them about the dangers of Covid 19, and what they need to do.
But as I mentioned above, throughout its existence, Alex FM has been the transition ground for aspiring presenters, broadcasters, journalists or radio technicians.
We live on hope.

We are hopeful that from these ashes, there shall rise Alex FM that will be stronger than before. That out of these rubbles, a new hope for the community, for the staff will grow; that Alex FM will come back and continue to play its crucial role in the rebuilding and development of the community of Alexandra.

Through the efforts of many women and men within the community, Stakeholders and community partners within and outside Alex, current and former Board members who reached out to help, and the dedicated employees of the station, Alex FM will not be muted!

Isaac Mangena is the Chairperson of the Board of Alex FM.