Soldier Of Peace Sings Against Apartheid 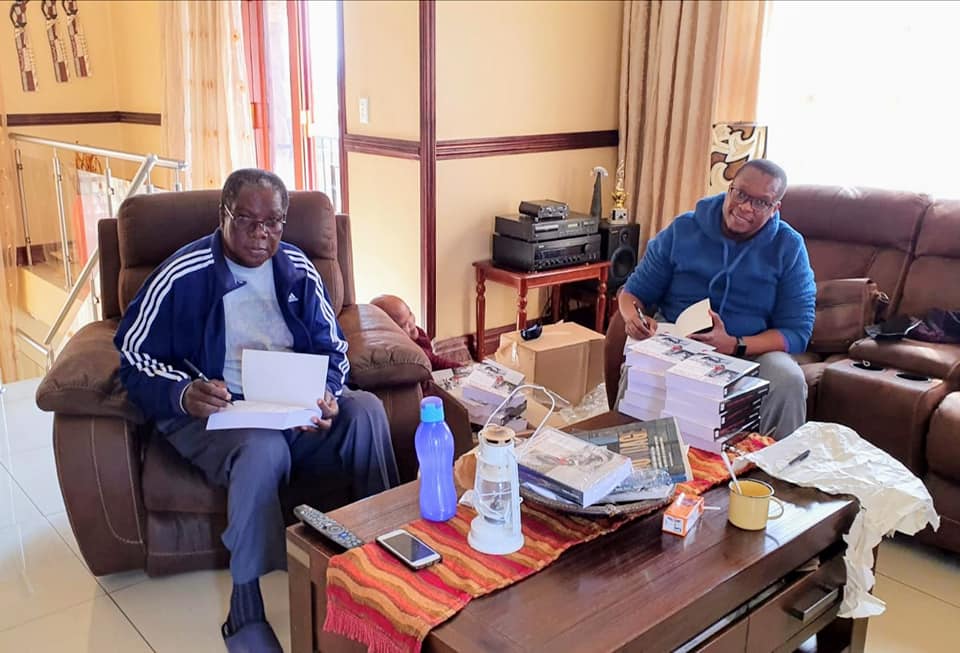 The one physical location I can credit as my source of political awakening as a cultural activist is ntate Matlherane Geoff Mphakati’s house in B3 Section, Mamelodi. Bra Geoff ’s place was a mecca of cultural activities, a foundation of several cultural organisations, and a Black Consciousness seminary. The venue was literally a record bar, printing and publishing facility, fine art studio, music and drama rehearsal stage, as well as a well-stocked library. Gratitude is due to Ntate Mphakatis’s wife, Mme Stephina Maokaneng, for her steadfast support to her husband by providing hospitality to us, her patience and tolerance for our eccentric behaviour, as well as cleaning the mess some of us left behind.

At some stage in between rehearsals at Bra Geoff ’s place and political gatherings, a poetry group called the Ancestors of Afrika was formed with comrades such as Jan ‘Banisto’ Mashilo, Gunman, as well as Andries Kgobi Makhoere, who had recruited me into these activities. I remember performing at a political meeting at a church in Mamelodi West. The activists and elders who addressed the meeting were Rev. Legotlo, the late Dr Fabian Ribeiro, the late Dr. Nthato Motlana and many others. That day the police came with big vans (Gomba Gombas) and police cars. Teargas canisters were discharged onto the gathering. We, the young ones ran away gasping for breath from its fumes.

Most of our leaders were arrested at that meeting. I was also cast in locally produced and staged plays like Uzenzile, So Afrika, Asinamuva and Take a leaf. In no time, the police took interest in these types of activity and accordingly stalked and hunted us out of our homes. The late Dr. Fabian Ribeiro helped all the comrades who were shot and beaten by the police in the process. He soon earned the moniker of The People’s Doctor as he became known for harbouring comrades and treating the injured ‘for free’.

Indeed, he was truly kind and so was his wife Florence, who was also a medical doctor. The People’s Doctor liked our poetry and music performances and he allowed us to use his home for rehearsals. He lived in Mamelodi West, Naledi Section U. We rehearsed in his garage almost every day until late in the day. Sometimes he would join us and give us some political lectures. Another prominent person whose house became a favourite hideout for young activists was the late Dutch Reformed Church’s Reverent Nico Smith. Unique about Rev. Smith and his wife, Ellen, is that they had surrendered the security and comfort of White Suburbs by relocating to Mamelodi in 1986 to live among Blacks. Smith used the same migration pattern as a drawcard to conscientize Whites, politically.

From 1987 to the early 1990s, Rev. Smith, in collaboration with the PCC (Pretoria Council of Churches), set up a Christian fellowship called Koinonia as a bridge for inter-racial dialogues as well as empowerment of Mamelodi residents, especially the youth. From it emerged the Mamelodi Encounter whereby groups of White students, some from overseas, took turns in being assigned to various families, with whom to stay in order experience Black lives first-hand. Usually, they were accommodated in some comrades’ homes – I once hosted a German guest.

There was also a special student house, like a commune, where a number of about 10 Whites lived together with Black counterparts. After Smith had earned our trust as activists in the township, we began to converge at his place for workshops as well as undertaking camping trips in order to socialise and exchange political views with White counterparts peacefully and as equals for the first time in our lives! Most of the events were organised as well as led through revolutionary songs and slogans by PCC comrades like Paul Zondo and Siphiwe Ngwenya, the latter of whom happens to be the current Board Chairperson of my Foundation. Siphiwe was by then also a student at the Vista University where he also belonged to a Creative Arts Society (CAS) formed by Lance around 1985.

The organization used to collaborate with cultural activists and participate in events in Mamelodi. It was during this period when I first met Lance who was by then an Eersterust resident after his round about trip from Marokolong village in Hammanskraal to Soshanguve apparently to dodge the Bophuthatswana police; and then from Soshanguve to Eersterust for purposes of being nearer Mamelodi where he was to commute as a student to Vista University, Mamelodi Campus. In August 1996, CAS convened a rare evening multi-racial cultural event graced by the likes of one cultural idol, Matsemela Manaka. At this event, Siphiwe acted in a play written and directed by Lance.

The Koinonia events were often dispersed by the police through teargas and batons. Like seeds, we would scatter into the township to which we were organically attached and feared to be removed from. But we always returned to the source. As demand for my performances grew at Koinonia, I found myself frequently playing in White suburbs where I could then speak English directly with Whites! Some of the gatherings were organised by progressive White liberal groups like IDASA (Institute for Democratic Alternatives in South Africa) and the University of Pretoria students; some of whom Lance and his comrades from Eersterust like Lucrecia Seafield and Nella Rabie helped in their recruitment to the ANC.

One of the recruits, Andries Nel, eventually ended up as an ANC MP (Member of Parliament) and Deputy Minister. One of the memorable events I played at was a party hosted some evening in August 1989 at the St. Cathedral Church, Pretoria, for Andimba Toivo ya Toivo, a SWAPO hero who was released from Robben Island in 1984. Soon afterwards, the house of the IDASA Director, Dr Ivor Jenkins, was sprayed with bullets one night by AWB (Afrikaner Weerstandsbewegging) members who later sought amnesty at the TRC (Truth and Reconciliation Commission) for the deed.

Fond memories of the show for Toivo influenced me to agree to join Junior Makhoere (Kona’s brother) in 1987 on a tour of Namibia where we staged his play Take a Leaf; said to be the first to be performed by Black artists at the Windhoek Theatre previously reserved for Whites. In the streets, we met SWAPO soldiers walking around in high spirits, with AK47s swinging from their shoulders as they sensed their hard-fought freedom around the corner following the annihilation of the South African army by Cuban-reinforced military front in the Battle of Cuito Cuanavalle in neighbouring Angola.

By then, our parents were not aware that we had become political activists – MaComrades (pronounced Makhomoreit!). For them, we were just innocent boys who loved to play football somewhere out of sight. But every June 16 we would get involved in the organising of political gatherings. Eventually, the police got to know about our activities. They visited our homes at night especially around 10 o’clock or midnight and lock us up for a few days to prevent us from participating in the preparations of the 16 June commemorations. From these check-ups, my family became aware of my clandestine political activities. It was routine for the police to arrest us in front of our parents. Some nights, I hid on top of the house wrapped with a rag when they came for me.

They circled the home but eventually left the yard empty-handed. On one particular night, they came and surrounded the house as usual. Granny told them that she was tired of them harassing her while her children were sleeping peacefully in the house. She insisted that I was in bed and threatened to pour boiling water over them if they ever set foot in her yard again. They left and never returned! There were times when we would be arrested without our parents’ knowledge. But upon noticing that we had not returned home, they would panic, and embark on checking for us at hospitals, mortuaries, and police stations. The police did not disclose to them that they had locked us inside the cells as they did not register us, because most of us were minors.

In the police cells, we would spend the time polishing police boots, or washing police vans and cars. Sometimes we just sat doing nothing. But for some, it was the time to receive political education (umrabulo) from the older comrades, sing struggle songs, chant slogans and listen to poetry.
Once released, we would be directed to report to the police station every morning before going to school and report back after school. Similarly, we were also supposed to report to the principal’s office before we went to our classrooms and again after school before going home. Failure to do that meant visits to the respective schools by the police. They would give graphic details of our disruptive misbehaviour to the principals and demand we be apprehended by teachers or big strong boys if we were spotted on school premises and accordingly handed over to them. On weekends, if we ever had to travel outside the township, our parents had to accompany us to the police station for permission. We were instructed to go to church every Sunday against our will and report to the priests and sign registers before going home.

I suppose that was one of the reasons why some comrades started to hate school and church alike; we sometimes absconded, and eventually abandoned both institutions altogether. Within the Ancestors of Africa were a few of us who were recruited by Levy Magolego to skip the country to Botswana to join the armed struggle through uMkhonto we Sizwe (MK). Dr. Ribeiro was supposed to arrange and finance our trip. Before we could depart, the information was leaked to the police by one of our comrades. So, the police came for us again and confiscated all our written poems and musical instruments from the Ribeiro garage. We were summarily arrested together with the doctor. But by then there were a few of us who had already attempted to skip the country by train. Unfortunately, they were arrested at Komatipoort station. I could not leave on the set date, because I had suffered another epileptic seizure. During the arrest, the police interrogated us about our intended trip, but I said I knew nothing about it. I lied by claiming that we had planned to go to Mabunu Simon Sabela’s Heyns Films in Johannesburg to audition as film actors. They still tried to squeeze some more information from us through torture. I was put in a small toilet where a leaking bucket was hung over my head. The police poured water into it so that it slowly dripped onto one spot on my head: tho tho tho tho! I could not think and breathe properly. After that, I started stammering when talking. I sang to help stop the stuttering.

About the book – CULTURE AND LIBERATION STRUGGLE IN SOUTH AFRICA – From Colonialism to Post-Apartheid edited by Dr Lance Nawa features essays from various artists, journalists, writers and activists reflecting on the role of the arts and culture in the fight against Apartheid.