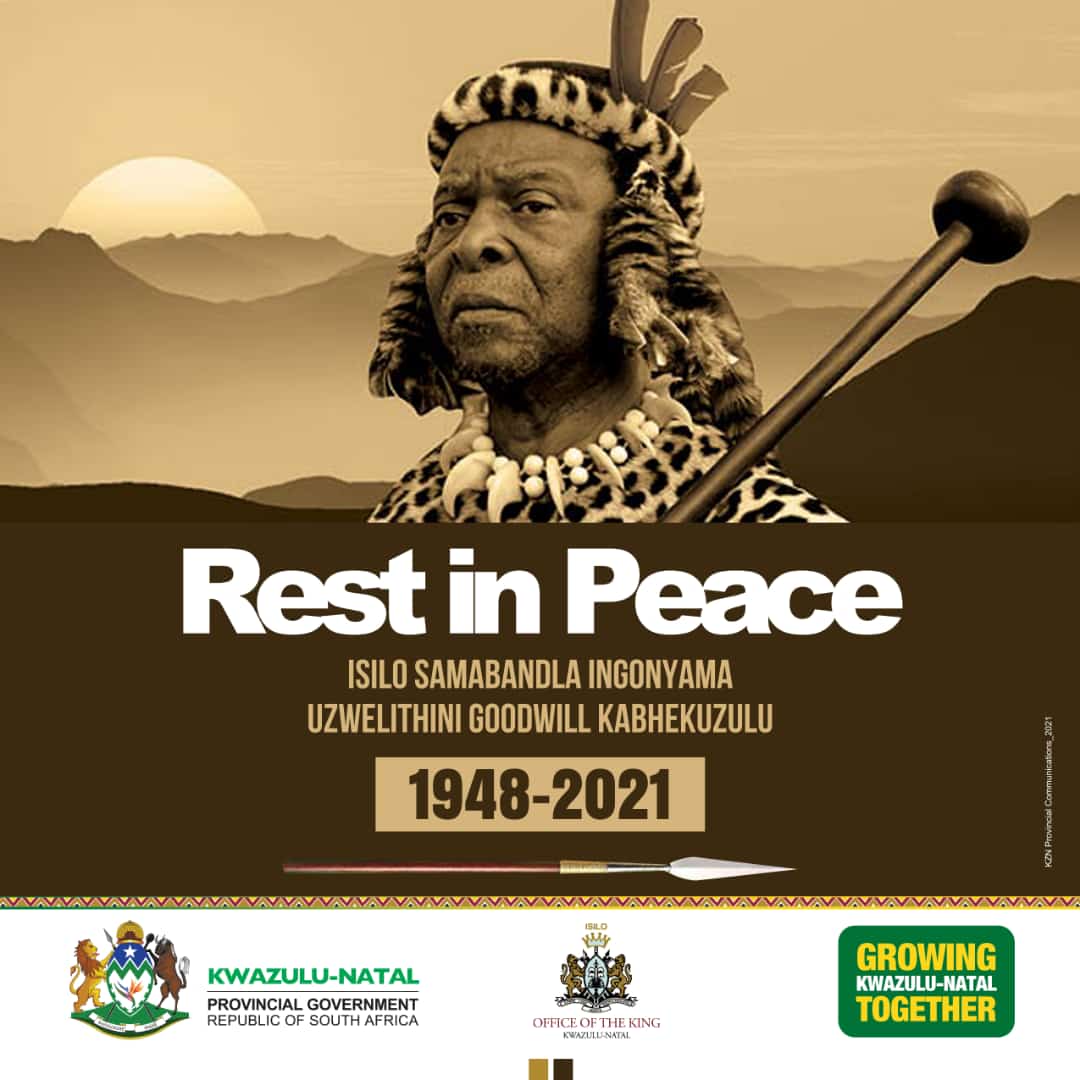 WHEN a king passes on to join his ancestors in the spiritual world the Ashante people of Ghana remark that the Asantehene has gone to his village.

It is a sign of respect and reverence to the King who is regarded not only as a leader of the living, but the main connection to past rulers now presiding over them from the world of the spirits.

The same applies in Zulu tradition, where it is never said a king has died, but rather, ukhotheme, meaning his majesty has taken his final bow.

The king was admitted to a hospital last month following complications with diabetes and his health worsened on Friday morning apparently due to covid-19 complications.

In a statement on Saturday the royal family announced that iSilo’s mortal remains would not be laid in state due to the covid-19 restrictions.

Condolences for the fallen monarch who was addressed officially as iSilo samabandla Onke, came from as far afield as Geneva, where the secretary general of the United Nations expressed the world body’s sincere words of comfort to the Zulu nation and SA.

The 72-year-old king, who has ruled for five decades was born in July 1948 in KwaNongoma, Nothern Kwazulu Natal.

By the time of his death, the king left behind his six wives and 28 children together with several grandchildren.

King Zwelithini is a son of Cyprian Bhekuzulu Nyangayezizwe ka Solomon, who ruled the Zulu nation from 1948 until his death at Nongoma in 1968. His mother was Queen Thomozile Jezangani kaNdwandwe.

He took over the reign of the Zulu nation in 1971, just two years after his father’s death.

When taking over the reign, he was a 20-year old young man. At this point, the family has not yet announced who will replace the king.

Zolani Mkiva, of the Congress of Traditional Leaders of SA says that there is no need to panic or to be worried about the way forward because the royal family has capable people, who learnt a lot from the late king.

“The passing on of His Majesty has caught us by surprise, and we are saddened. This is a bad time for Africa, his passing is untimely and it leaves us poorer as people in a sense that he leaves a very huge void as you know this was a very great leader who had a huge presence whenever he was among us.”

He says losing a leader of King Zwelithini’s calibre is like losing an entire library to a fire.

“He inspired us with his greatness and how he carried himself, he was very exemplary as a leader and he represented the institution of traditional leadership and royalty very well. I would like to send my condolences to his family and the Zulu nation.”

The king will be remembered as a leader who played a huge role to revive and preserve several Zulu cultural practices, which include Umhlanga also known as the Reed Dance ceremony which is aimed at celebrating young girls and women’s virginity.

Another aim of the initiative was to fight against the spreading of the HIV-AIDS pandemic in the province.

“Isilo samabandla kaZulu was an exceptional custodian of the African heritage, culture and traditions. He led from the front on a myriad of national ritual and traditional ceremonies. His visionary leadership saw him promoting the Umkhosi womhlanga (Reed Dance ceremony) into a monumental annual occasion on the world’s cultural calendar. Without a doubt, King Zwelithini will be remembered as a cut above the rest in the promotion, protection and preservation of the institution of traditional leadership and African royalty,” said Mkiva.

During his reign King Zwelithini also made headlines for many different reasons. In 2015, he was accused of making utterances that were deemed to fuel xenophobia during attacks on foreign nationals in the country at the time. He was addressing the crowd in Pongola when he said “foreign nationals must pack their bags and return to their country.” He argued that his remarks were taken out of context. Later the monarch was called to the SA Human Rights Commission to explain, but he was reluctant to cooperate.

The matter was investigated and he was cleared of any wrongdoing on the ground that there was no evidence to link his comments to the xenophobic violence that claimed the lives of seven people in Isipingo, south of Durban.

Even though the government had much respect for the king, he was a regular critic of the ANC led administration. He once accused the ruling party of mishandling the country’s affairs.

There were times in which the king was criticised by many after he praised the now-defunct apartheid regime.

King Zwelithini threatened war when the government said they had plans to abolish the Ingonyama Trust Land Act, which was promulgated in the dawn of South Africa’s democracy in 1994 to allow the king to smoothly administer the 2.8 million hectares of land that is traditionally owned by the Zulu people, represented by their king.

Abolishing the Act was going to affect the operations of the trust which is to manage land that was under King Zwelithini’s custodianship as the sole trustee.

To fight against the abolishment of the trust act in court, the king asked his subjects to donate R5 to pay legal costs.

In 2018, the king and the traditional leaders of KwaZulu Natal opposed the government recommendations that stated that the land under the Ingonyama Trust be surrendered to the Department of Rural Development and Land Reform.

The KwaZulu Natal provincial government gives the royal family an annual fee of approximately R 60 million. This funding has met with a number of criticism from opposition parties and other royals who felt the Zulu monarch was being given undue preference over other kings and chiefs.

King Zwelithini took his final bow while the battle for the land remained unresolved.

President Cyril Ramaphosa has “offered his sympathies and prayers to the royal family, to the Zulu nation, and to the people of KwaZulu-Natal and beyond – for whom the Ingonyama was an important symbol of history, culture and heritage.”
“His Majesty will be remembered as a much-loved, visionary monarch who made an important contribution to cultural identity, national unity and economic development in KwaZulu-Natal and through this, to the development of our country as a whole.”