We don’t know who is next 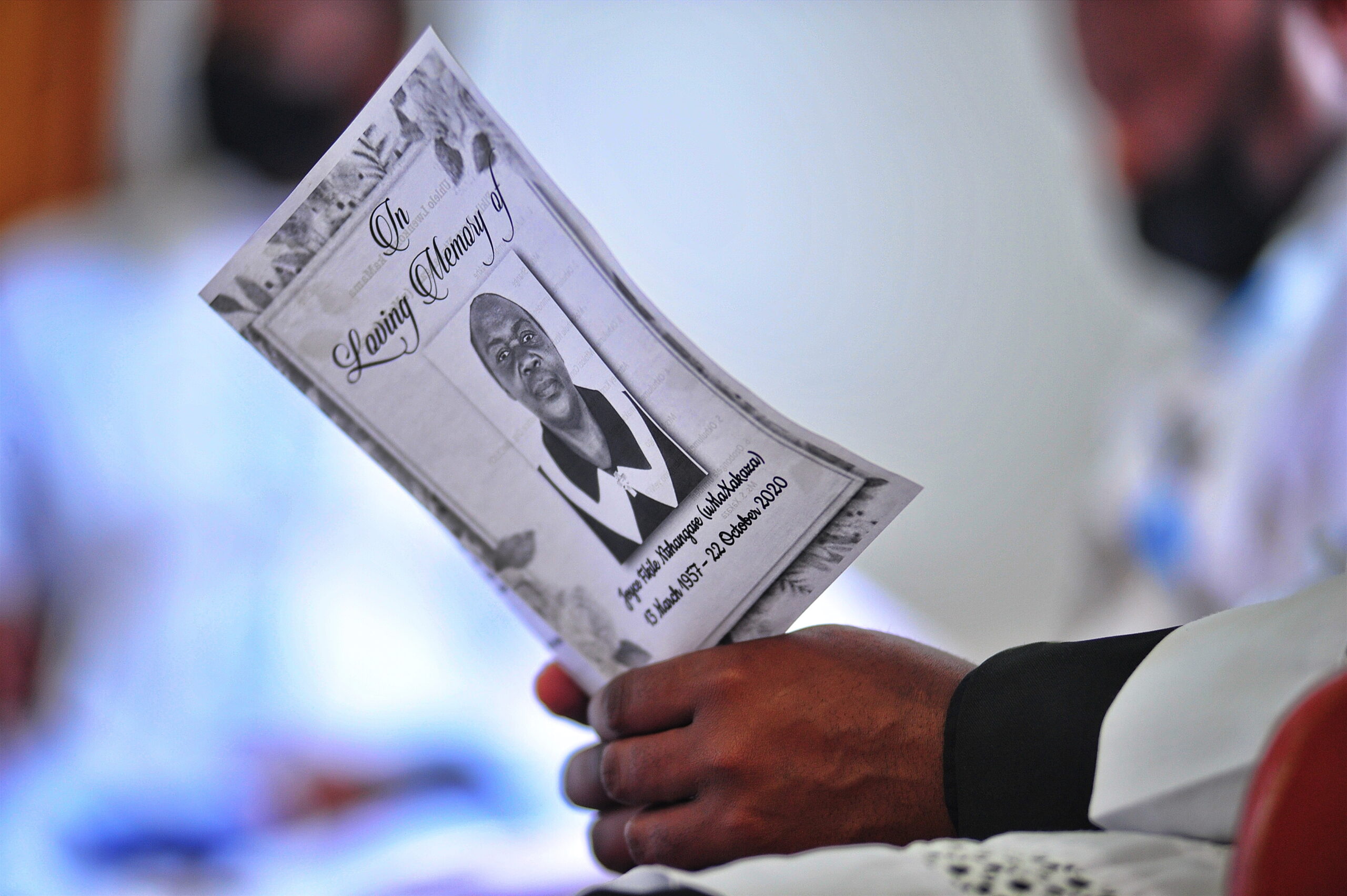 Community activist Fikile Ntshangase was shot and killed by unknown gunmen at her home in Ophondweni in Somkhele in KwaZuluNatal. She was a member of the Mfolozi Community Community Environmental Organisation which is involved in a legal battle against coal mining company Tendele Coal. Activists from the Mining Affected Communities United in Action turned up in great numbers for Ntshangase's funeral in KwaMaphumulo in KwaZuluNatal. Photo: Lucas Ledwaba/Mukurukuru Media

“Have no doubt it is fear in the land. For what can men do when so many have grown lawless?”

The community which is involved in a legal battle against mining company Tendele Coal is gripped by fear following the killing of 65-year-old activist Fikile Joyce Ntshangase, who was shot six times in her home in Ophondweni on October 22.

The two men, who walked into her house that night pretending to be passers-by requesting a glass of water and later shot her in her lounge, are still at large.

Ntshangase, a leader in the Mfolozi Community Environmental Justice Organisation (Mcejo) was sent off to her final resting place in song amidst a light drizzle in KwaMaphumulo on Friday morning.

If it’s proven that Ntshangase’s killing was a result of her activism, she joins a long list of campaigners for environmental rights who were slain for their work globally.

Her comrades suspect her murder is linked to her active leadership role in opposition to the mining. The activists and community members who are leading the opposition against Tendele’s efforts to expand its operations and alleged violations of environmental and basic human rights are now living in fear of the unknown gunmen.

“We are no more safe. Whatever we do now we have to be careful because we don’t know who’s next,” Billy Mnqondo, a member of Mcejo and Mining Affected Communities United in Action (Macua) told Mukurukuru Media.Mnqondo, an activist based in the Fulweni area, said word has been going around in Somkhele after Ntshangase’s killing that “there are four more to go.”

The resumption of mining operations by Tendele Coal in 2007 has caused division in the rural community of subsistence and small scale commercial farmers.

Somkhele mine is owned by Tendele Coal mining, a subsidiary of Petmin. Petmin also has operations in Canada, Turkey and Liberia.

Those like Mcejo opposed to the mining on the grounds that it will destroy their livelihood and traditional way of life have accused those in support of using threats and even violence to silence them.

“This year it’s been bad, at least every month [with threats],” said Mcejo’s lawyer Kirsten Youens after Ntshangase’s funeral.

“People are constantly being harassed, being told there’s going to be bloodshed and being summoned to meetings with the traditional authority,” Youens said.

She said members of the community, including Ntshangase have been reporting to her allegations of threats made against them. In one of the brazen acts of intimidation in October, a gang of alleged hitmen gate crashed a meeting between Mcejo members and Youens’ team at a golf course in Mtubatuba.

The men, seen in a video recorded by one of the members present, interrupted the meeting demanding to know what is was about.They were also questioning why Youens was there and demanded she leave immediately.

In the video, Youens can be heard telling the aggressive men in response to their demands to know what the meeting was about: “It’s none of your business.”

Youens said she has not been personally threatened but that Mcejo members reported threats against them, allegedly by people linked to the Mkhwanazi Traditional Authority, which is at the centre of the mining battle.

On Tuesday 3 November, the Supreme Court of Appeal in Bloemfontein is set to hear the community’s appeal against an earlier decision by the Pietermaritzburg High Court.

The community from 10 villages in the Somkhele area near the town of Mtubatuba is engaged in a legal battle with Tendele Coal Mining.

Somkhele reportedly has more than 50% of open pit mineable anthracite [coal] reserves in the country. The community through Mcejo applied to the court in 2018 to interdict Tendele Coal from mining until it complies with legal and environmental rights regulations.

Judge Rishi Seegobin dismissed the application with costs, saying that the applicants had not made out a proper case for an interdict.

Seegobin ruled that the applicants “seem to have adopted a scatter gun approach hoping to hit one target or another.”

“The applicants have simply failed to put up cogent evidence to support their contentions that Tendele is mining unlawfully without the requisite authorisations, environmental or otherwise,” said Seegobin in the ruling.

The community also made a second application in the North Gauteng High Court to reverse a decision to grant Tendele Coal Mining an extension to its mining licence which granted the company an additional area extending close to the Hluhluwe Game Reserve.

In court papers in the case dismissed by Seegobin, the applicants, Global Environmental Trust, Mcejo and Sabelo Dladla said Tendele is acting illegally in conducting the mining.

They argued the company had no environmental authorisation issued in terms of section 24 of the National Environmental Management Act 107 of 1998 (NEMA) or any equivalent thereof such as Section 38 A of the Mineral and Petroleum Resources Development Act 28 of 2002 (MPRDA) as amended.

The applicants also said Tendele Coal is conducting the mining without any land use authority or approval from any municipality and has no written approval in terms of Section 35 of the KwaZulu-Natal Heritage Act 4 of 2008 to remove or alter traditional graves from their original position.

Dladla, who was one of the main applicants in the court cases, has now withdrawn from the action after his home was allegedly attacked.

“When you are vocal against mining you get threats. When you speak out about how mining vandalises our land without compensation you are threatened,” said Mnqondo.

A ruling in the North Gauteng High Court has given communities like Somkhele some hope.In the matter between the Amadiba Crisis Committee and the Australian company Transworld Energy and Mineral Resources (TEM), Judge Annali Basson ruled that Mantashe must obtain consent from the community, as the holder of rights on land, prior to granting any mining right to TEM.

She said while the informal rights of customary communities were previously not protected by law, the community now has the right to decide what happens with their land.

The Amadiba had lodged an application to ask the court to give the community the right to say no to mining in their area.The Eastern Cape community has been involved in a protracted battle to resist the mining of titanium on their ancestral land.

Just like in Somkhele, at least 12 people opposed to the mining have been killed since 2009.The last to be shot and killed was community leader Sikhosiphi Bazooka Rhadebe in 2016.

Macua noted in a statement after Ntshangase’s death that “Somkhele and Xolobeni are not isolated cases. Across South Africa our members are reporting similar collusion between the few who benefit from mining, against the majority who do not. The patterns of assassinations, bribery and deliberate campaigns to buy over traditional leaders and thugs to intimidate and oppress community voices, are repeated throughout the lived experience of mining communities across South Africa.”

KwaZulu-Natal violence monitor Mary de Haas said there has been a stepped up campaign by Tendele and the KwaZulu-Natal government since February 2020 to persuade applicants to withdraw the court challenge.

She said this included those most affected by the expansion including in the Ophondweni area to force them to accept the compensation the mine is offering.

“During these past few months several Mcejo members have been offered R300 000 by the mine to withdraw the cases. Some have been seduced by this offer and their membership of Mcejo has been suspended,” she said.

De Haas added that “all those refusing to sign their properties over to Tendele Mining have received death threats, some linked to local traditional leadership, one survived a drive-by shooting in her home, and one applicant was attacked in his home.”

Tendele expressed its hopes that the police investigation currently under way into the murder will bring the perpetrators of this terrible crime to book.
Non-profit environmental justice service and developmental organisation GroundWork has called on Police Minister Bheki Cele to ensure that the murder and other violent threats in the Somkhele area are swiftly investigated to prevent further loss of life and the matter possibly referred to the Hawks.

The organisation also wants increased protection for other community members who have challenged the operations and expansion of Tendele’s Somkhele mine and a report on the progress of the investigation be made public.

As questions linger over the motive behind Ntshangase’s killing, another one of Paton’s lines from over half a century ago echoes the feelings of today’s generation.

“Cry for the broken tribe, for the law and the custom that is gone. Aye, and cry aloud for the man who is dead, for the woman and children bereaved. Cry, the beloved country, these things are not yet at an end. The sun pours down on the earth, on the lovely land that man cannot enjoy. He knows only the fear of his heart.” – Mukurukuru Media

Published in Opinion, Our Stories and Photography