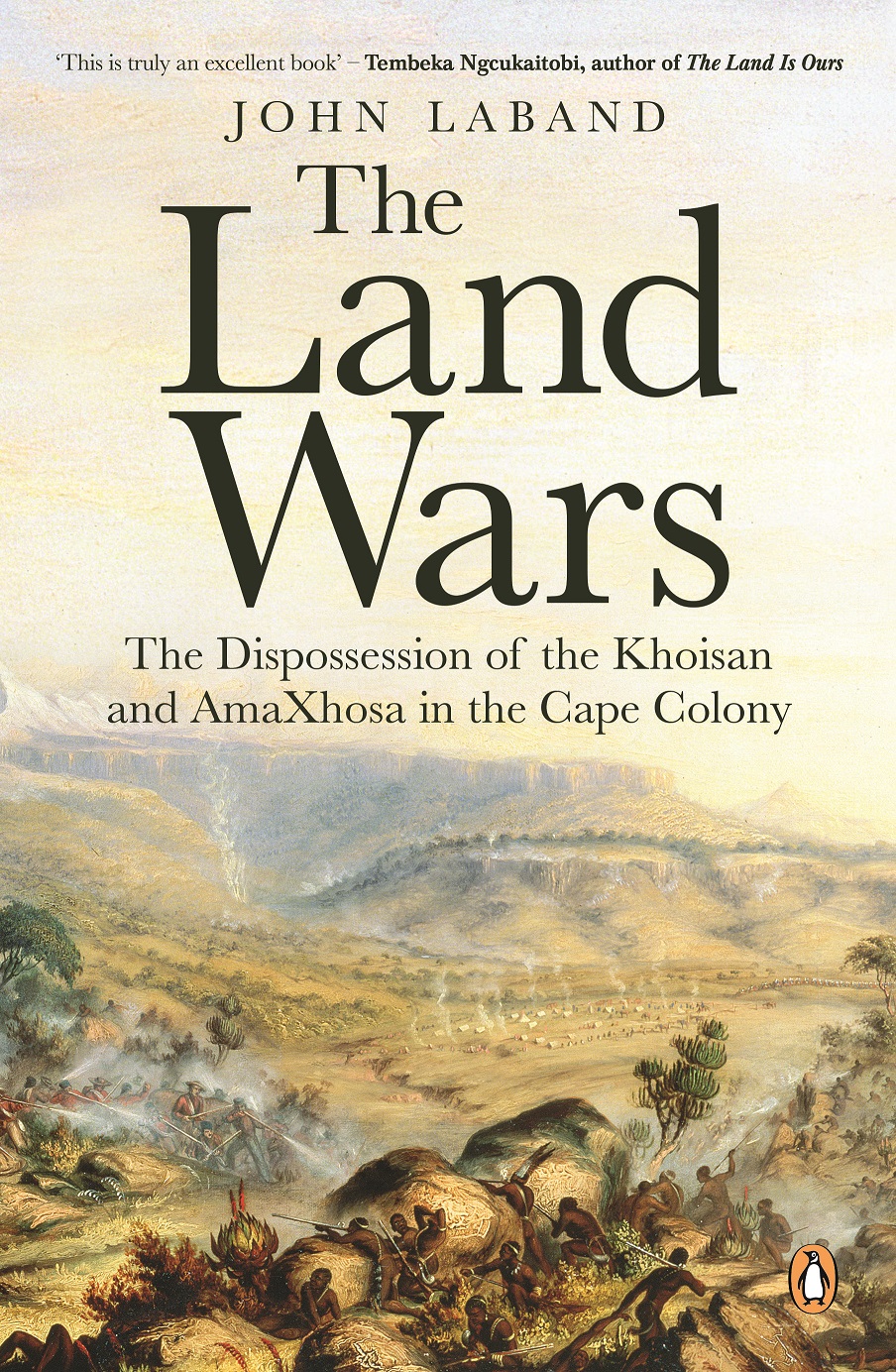 In this book titled The Land Wars – The Dispossession of the Khoisan and AmaXhosa in the Cape Colony author and historian Professor John Laband recounts the important history of how the Khoisan and Xhosa people were dispossessed of their land and subjugated from the time that Europeans first
arrived until the end of the Cape Frontier Wars (1779–1878).

This is an extract from the chapter titled The Eighth Cape Frontier War, December 1850–March 1853 (the War of Mlanjeni), and the Kat River Rebellion.

By mid-1850 the amaXhosa were aggrieved and apprehensive. Sir Harry Smith had expelled them from their lands in the Ceded Territory, and for them British Kaffraria ‘was a monster which swallowed them up, tore them from their children, and squeezed them off their land onto the labour market’. It was no wonder, Jeff Peires has reflected, that ‘weary and despondent, they determined to make a final stand’.1

The war that ensued, the Eighth Cape Frontier War, became intertwined with a broad, multi-ethnic rebellion against rapacious settlers and coercive officials, what an appalled Harry Smith characterised in April 1851 as an ‘infernal coalition’ to ‘immolate the White Man’.2 This war-cum-rebellion, remembered for generations as a heroic struggle against dispossession by the whites, was the longest of the frontier conflicts, lasting for twenty-seven months from December 1850 to March 1853. It required Britain’s greatest military commitment to date, with 8 000 regular troops eventually being deployed in the field, and it was the most expensive too, with the British government having to make extraordinary funds available for its prosecution. Casualties on the British side were exceptionally heavy for a colonial campaign, amounting to about 1 400 (compare this to the 100 casualties in the Sixth Cape Frontier War), but were insignificant when taken against the 16 000 suffered by the amaXhosa and their Khoikhoi and Thembu allies, the heaviest toll by far in the whole dreadful sequence of the frontier wars, the veritable loss of a generation.3 This war was also the most desperate and brutal yet fought, with both sides guilty of committing atrocities to an unprecedented extent.

The amaXhosa remember this terrible conflict as the War of Mlanjeni, after the prophet of that name who rose among them and became Sandile’s war-doctor. Mlanjeni was a teenager, a Ndlambe commoner who acquired his name, which means ‘In the River’, because he spent much of his time lying half-submerged in a stream to relieve his tuberculosis. At an early age he showed all the signs of being called by the ancestral shades as a diviner. In Xhosa religion, diviners communed directly with the amathongo and the nature spirits of the earth and water. When the world seemed out of tune and was visited by disease and disaster, people turned to them to consult the occult forces that controlled the universe and to prescribe remedies. And in 1850 the Xhosa universe certainly appeared to be quite unstrung. Its lands were being stripped away, its culture was being forcibly transformed by Smith’s intrusive policies, and in that year the countryside was again gripped by grinding drought and the dearth that followed. In their desperate plight, the people were eagerly receptive to the promise of supernatural intervention, and this is when Mlanjeni stepped to the fore.

Mlanjeni was following in the footsteps of the war prophet Nxele, who had rallied the Ciskei amaXhosa in the Fifth Cape Frontier War. He proclaimed that the amaXhosa must root out the contaminating influences of witchcraft, to which he traced all the ills afflicting his people, and prophesied that they would drive out the white people if they followed his injunctions. He urged his followers to kill all their dun- and yellow-coloured cattle, whose evil tinctures were widely associated with the white people, and prophesied that the sacrifice of these beasts would ensure the disappearance of the pale oppressors. However, Mlanjeni seemed not to think this enough in itself, and yoked it to necessary military action in which the warriors would receive occult protection against their foes.

Mlanjeni’s prophecies rapidly gained a mass following among ordinary amaXhosa, and the Xhosa chiefs and men of substance began to see this popular mobilisation as a genuine threat to their already subverted authority, and pondered how they could control and direct the movement. Since they themselves had been driven to the edge by Smith’s policies and were already contemplating taking up arms, they came to the conclusion that they could regain their legitimacy in the eyes of their people and vindicate their traditional authority if they harnessed Mlanjeni to a war waged under their own battle-hardened leadership.

Very cannily, therefore, Sandile appointed Mlanjeni as his war-doctor. The amaXhosa believed that occult forces – magic – affected every human activity, and employed ritual medicine to ‘doctor’ warriors, hunters and hunting dogs, and used charms and other symbolic medicines to ward off sickness, infertility, accidents, lightning and witchcraft. Every chief employed his own war-doctor, whose job it was to render his warriors fierce by giving them ‘medicines’ derived from dangerous animals (and sometimes from humans too), and to administer others that, when swallowed or rubbed into incisions in the body, would protect them from harm.

Mlanjeni was in this mould. He foretold that those who fought the colonists would not fall in battle if their spears, along with the charm sticks that they attached to their firearms, were daubed in the purple juice of the root of the pelargonium bush,4 and if their bodies were likewise anointed with it. To make warriors even more invulnerable, he exhorted them when attacking the enemy to chew on short sticks of the plumbago bush (normally used to ward off thieves and lightning),5 to spit out the fibres and to call on the amathongo and the prophet to assist them. And if this were not enough, Mlanjeni undertook to fill the white men’s guns with water and render them useless.

During the final months of 1850 the amaRharhabe began to prepare for war by amassing firearms and storing food. In September, representatives from most of the Xhosa chiefdoms gathered in Ngqika territory in the Amathole to confer with Sandile. It was then that Mlanjeni prophesied that Maqoma would lead the amaXhosa in a great war to recapture their land. Maqoma had been permitted by Smith to leave Port Elizabeth and return to the banks of the Tyhume River near Fort Hare, where he now lived among his Jingqi following, much reduced from around 17 000 adherents to a paltry 2 000 or so. Nevertheless, despite his reduced circumstances, with a war of revenge on the cards Maqoma was recovering much of his erstwhile panache and charisma. His fellow chiefs unequivocally recognised him as the best and most experienced military commander among them, and it hardly required Mlanjeni’s endorsement for them to hail Maqoma as their leader in the coming war.

In Cape Town, Smith was being made uneasy by news of these warlike preparations on the eastern frontier. He travelled to King William’s Town and summoned the Rharhabe chiefs to appear before him on 26 October 1850. When Sandile and Maqoma failed to arrive (and with vivid memories of Hintsa’s fate at Smith’s hands in 1835 it would have been surprising if they had), the governor, in his habitually intemperate way, deposed Sandile as the Ngqika chief. On 30 October Smith appointed Charles Brownlee to administer the amaNgqika through Suthu, the disgraced Sandile’s mother. Satisfied that he had closed the lid on an incipient revolt, Smith returned to Cape Town.

In his boundless assurance, combined with his essential contempt for the amaXhosa, Smith had misread the situation. Even though the amaNgqika continued with their preparations for war, Smith pooh-poohed the reports that they were doing so. But with word coming in of alarmed frontier farmers abandoning their farms with all their stock, he could do so no longer. He hurried back to the Eastern Cape with reinforcements, landing at East London on 9 December. Despite his swagger, Smith was uneasily aware that he had nothing to be complacent about if it actually came to fighting, since, following the wishes of the government at home, he had (as we have seen) drastically reduced the Cape garrison. In December 1850 he had only 1 700 British regulars at his disposal along the eastern frontier, of whom 900 were garrisoning various strongpoints, leaving only 800 available for service in the field. It was thus up to him to head off war by bluff and braggadocio.

His gnawing concern given away by the eruption of a great carbuncle on his neck, Smith rode north-west from East London to Fort Cox atop its great rounded hill in a loop of the Keiskamma. Nearby the fort, on 19 December, he met Maqoma. The meeting did not go well for Smith. When he brashly warned Maqoma that he could have his ships at East London full of soldiers ‘to punish all bad men who stir up the country to strife and war’, Maqoma scoffed and asked the governor whether he had ‘any ships that can sail into the Amathole’.6 Riled by Maqoma’s effrontery, Smith decided that, short of troops as he was, he must nevertheless nip the looming rebellion in the bud and bring the Rharhabe leaders to book with a pre-emptive strike.

Accordingly, on the morning of 24 December 1850 Lieutenant-Colonel Mackinnon, the commandant and chief commissioner of British Kaffraria, led 600 soldiers (comprising British infantry, CMR and Kaffir Police) out of Fort Cox into the Amathole. His orders were to capture Sandile. Mackinnon marched east by way of the Booma Pass, a gorge on the upper Keiskamma, where Maqoma waited for him in ambush. The defile was too narrow to allow the mounted men to come to the aid of the infantry fighting past hundreds of Ngqika sharpshooters, some of them perched in trees, firing down on them from the rocky precipices above. Having pushed his way through the pass, Mackinnon decided it was too dangerous to return to Fort Cox by that route, and led his men south out of the mountains towards the Burnshill Mission and Fort White.

On Christmas morning the amaNgqika counter-attacked under Maqoma’s command, moving out of the Amathole to overwhelm the military villages of Woburn, Auckland and Juanasberg (named after Smith’s wife) along the Tyhume River. At Auckland the amaXhosa permitted the lamenting white women and children to depart, leaving their menfolk to fight to the death. The amaRharhabe then put Auckland to the torch, along with the other two captured villages. All along the frontier, settlers, terrified by gruesome reports of the sack of the military villages, took refuge in laagers and other strong points. Grahamstown was flooded with refugees and barricades were thrown up across the streets to put the town in a state of defence.

Initial Ngqika military success ensured that other amaXhosa rallied to their side, including the imiDange under Tola, the amaMbalu under Stokwe, the imiDushane under Siyolo, and a section of Dyani Tshatshu’s amaNtinde, but not the chief himself. Maqoma’s strategy following his surprise attack on the military villages was to capture the principal British forts between the Amathole and the Kat River, namely Fort Cox, Fort White, Fort Beaufort and Fort Hare, all of them really no more than weakly fortified military camps. For their part, it was essential for the British, their prestige already dinted by the capture of the military villages, to hold these forts at all costs. The amaNdlambe, amaGqunukhwebe and other Xhosa groups within British Kaffraria were still uncommitted to the war, and the loss of any of these forts would probably persuade the waverers to join the Ngqika camp. Moreover, widespread Rharhabe successes might also bring the amaGcaleka into the fray.