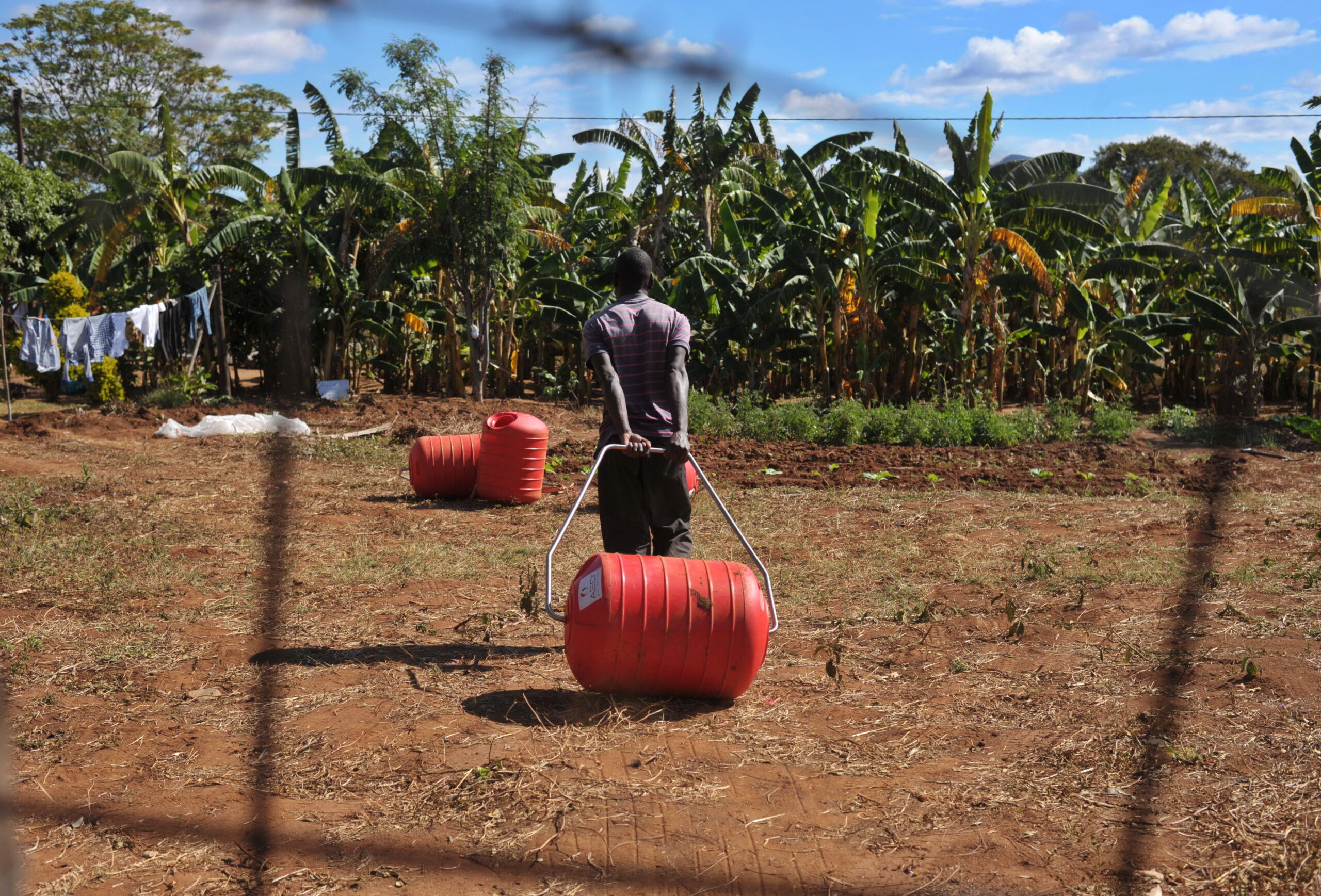 A partnership between a traditional authority, government and civil society brings water to a parched community writes Lucas Ledwaba

Ol’ Frans Msiza watched proceedings from his house as a group of dignitaries presided over the official opening of a borehole some 100m away from his homestead.

If he had his way he would have joined in on the ceremony to celebrate – but word had already been sent out that community members stay away in line with covid-19 regulations.

After the small gathering had dispersed Msiza walked to where two green water tanks tower over three taps standing in line on a cement block below.

“It’s like we are dreaming,” the pensioner’s face lit up as he admired the new structure.

Although three taps and two water tanks in the middle of a village may look an insignificant development in the eyes of an outsider, but the construction of the borehole will bring major changes in the lives of Msiza and scores of other residents in the villages around Matsila in the Collins Chabane local municipality of Limpopo.

On Friday, 19 June, representatives from the Nelson Mandela Foundation,  the Johannesburg Securities Exchange listed chemicals group AECI, Imbumba Foundation and the Lepelle Northern Water and government structures gathered in Matsila, near Elim, to hand over the project.

The project which is the brainchild of local traditional leader Chief Livhuwani Matsila, is set to benefit an estimated 2500 households in the area which comprises largely of rural villages starved of a reliable water supply.

Matsila, passionate and unapologetic community development advocate heads the Matsila Community Development Trust which facilitates and co-ordinates socio-economic development activities in the area under his jurisdiction.

The community projects include a game farm, poultry projects, livestock and vegetable farm, arts and educational development projects run by and benefiting local communities. Like many of the country’s rural areas with low economic activity, the area is plagued by poverty, high unemployment, poor nutrition and it is estimated that 52% of its people live below the poverty line.

The borehole sponsorshing also came with a donation of 200 rollers with a capacity to carry 50 litres of water to help with ease of transporting water down the rocky streets of the villages.

“These water rollers will be communal property to be utilised by households on a roaster basis within each community,” said Matsila.

“This project is a milestone project in the community because for more than two decades we’ve been struggling with acute shortage of water and we’ve been pleading with authorities to give us water without any success,” he said.

“We are glad that finally, after long discussions and meetings the water is finally here for the people. You will know that people used to get water from the river, sharing it with domestic and wild animals. So gone are the days when that is going to happen.”

Matsila explained that those families that are far from the water points are going to be the ones that get the hippo rollers first “which will make it easy for them to cut the water to their homesteads.”

But he is awake to the realities of the water challenges that still plague many communities.

“…this is not yet uhuru because we still want to get water form the bulk water supply which runs across our village. But that’s the next effort which we are going to make so that we get this water from the main pipes so that the boreholes become supplementary in case there’s drought or there are maintenance issues related to the main supply,” he said.

Matsila said going forward they want to make sure that each and every household has got a stand pipe that supplies water directly to the homesteads.

“So we still have got a long way to go to show that our people’s rights to clean water and sanitation are provided for within the community.”

Lepelle Northern Water chairperson Joe Mathebula said although the water authority is responsible for bulk water supply and doesn’t necesarilly deal with boreholes, this was a special case after receiving pleas from the community and government structures.

“In this particular case there was a need for the community to have access to water through boreholes,” said the newly appointed chairperson.

He said the new board is trying to resolve some of the problems that have seen people especially rural areas in Limpopo struggle to get regular access to clean drinking water.

“Limpopo is a water scarce province [but] initiatives and skills are on the go. We are working hard to ensure that communities get water,” said Mathebula.

Back at the borehole, Msiza turned one of the taps and as a gush of water spat out he placed his calloused hands underneath and let the water run through his fingers before he took a generous gulp.

“Yaaaa,” he smiled with satisfaction. “It’s really here. We did not have water before. It really looks like a dream. Life without water, no, it wasn’t good at all.”

At least now the long walk to the river and communal taps that almost always do not have water will be a thing of the past. – Mukurukuru Media