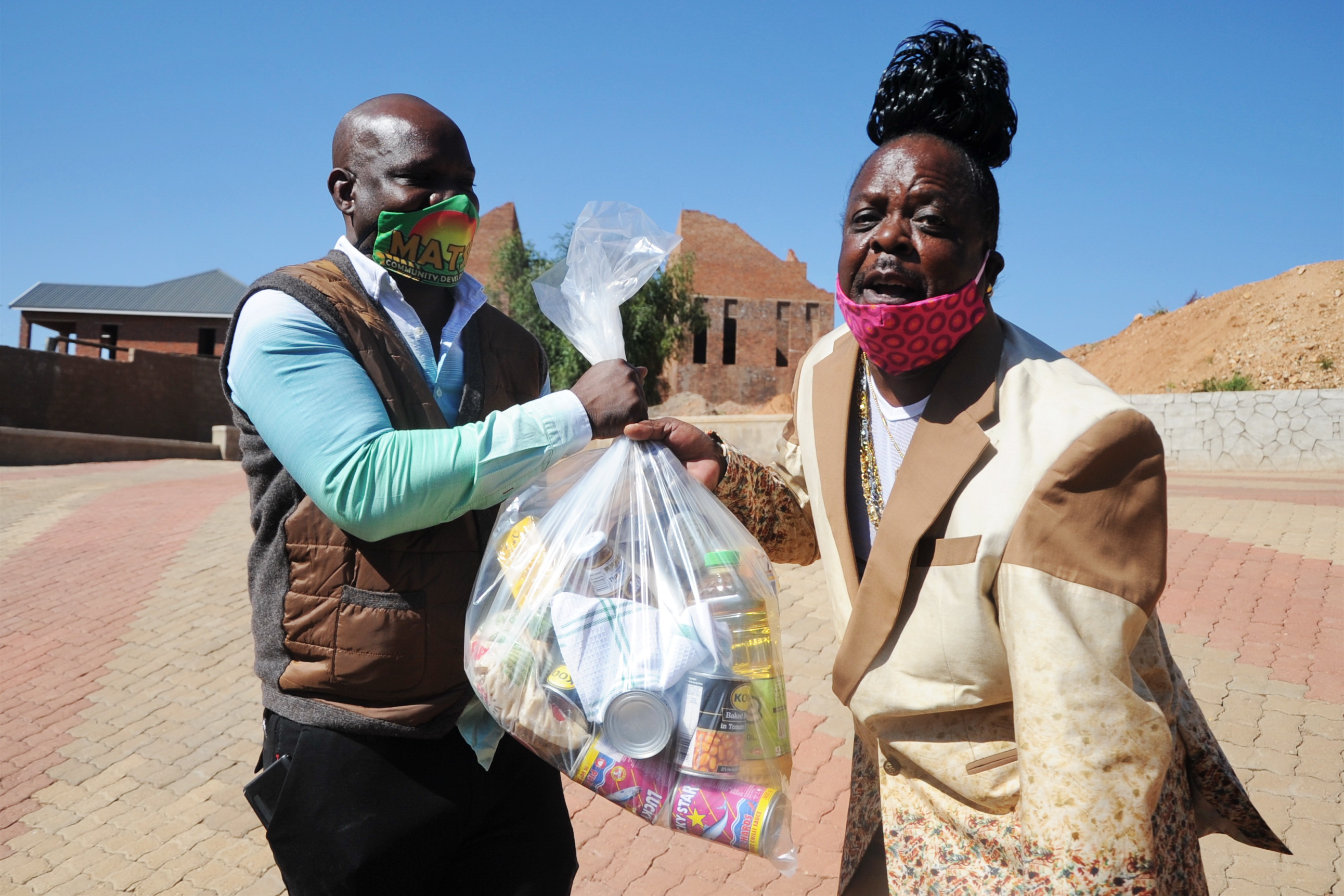 Non-profit organisations inclouding the Radzambo Cultural Foundation and the Shaka Bundu Foundation handed over 300 food parcels meant for Limpopo artists in Ha-Matsila yesterday. The food parcels are set to benefit more than 200 artists in the Vhembe District through the Vhembe District Music Forum. Topmartists including Dr Thomas Chauke, Colbert Mukwevho, Penny Penny and Jah Lady Dorris were among those who graced the occassion together with member of parliament Faith Muthambi. Photo: Lucas Ledwaba/Mukurukuru Media

The Covid-19 pandemic has hit artists so hard some of them have nothing to eat or feed their families.
“Some artists have been calling literally crying, saying please, do something to help us,” Chief Livhuwani Matsila told Mukurukuru Media at the weekend.

Matsila is a prominent Limpopo traditional leader and a former head of the ANC’s parliamentary caucus who is close to president Cyril Ramaphosa.

The outbreak of the Corona virus has led to cancellation of gigs and has virtually brought the sale of CDs to a halt.
The government lockdown imposed to minimise the spread of the virus came at a time when most artists hoped to cash in from gigs during the Easter holidays.

Although government has made available relief grants for artists, many are running on empty.

In March the department of arts and culture announced a R150 million relief fund to assist artists, athletes, technical personnel and others in the sector.

Minister Nathi Mthethwa said the total number of applications adjudicated in the arts and culture sector was 1050 with 232 recommended and 603 not recommended.

“We are concerned that the the largest number of those not recommended are artists who are seemingly in greater need of relief,” Mthethwa said in a statement.

He said some of the reasons for non-compliance included missing application documents, while some were attached but not filled in and no cancellation or even contract documents and failure to provide proof of cancelled events.

“We have seen that we have not moved as fast as we can in  allocating these funds so we have beefed up our mechanisms in order to fast-track the process.

“There were technical glitches in the beginning, as we are creating a new system to deal with a new problem. In some instances, teething problems as it were, the adjudication panel felt that the Department needed to give more information.

“They therefore referred such applicants back to the Department. So the back and forth in that process was one of the major causes of the delay, which speaks to inherent flaws in our system,” Mthethwa said.

On Saturday they attended a ceremony to receive food parcels on behalf of more than 200 artists based in the Vhembe district of Limpopo.
The gig was organised by the Radzambo Cultural Foundation, the Vhembe District Musicians Forum and other NGOs.

Mukwevho, revered as SA’s king of reggae said artists had not been able to earn a living since the outbreak of the Covid-19 in March.
This, he said, had rendered many artists destitute.

“Most of the musicians rely on performances and selling CDs at shopping centres. This covid-19 did a lot of harm on artists. We all need crowds, we perform for people, most artists rely on shows so it’s definitely a hard time for musicians.

“You can imagine for someone who is expecting to put food on the table relying on everyday sales and nothing coming in for three to four weeks.”

Chauke pleaded with government to assist.

“We will die of hunger and plead with our government to not ignore us. We didn’t even apply for the announced relief funds because government failed to communicate properly about the applications,” said the multiple award winning Tsonga disco king.

Penny Penny said most of the up and coming artists were hardest hit as they rely solely on their craft. He said the initiative would go a long way in assisting them.
Matsila said he was approached by artists who pleaded for assistance.
He said through the Radzambo Foundation they have already managed to distribute 1 000 food parcels in the community which includes 300 for artists.

Matsila said an assessment of the condition of local artists revealed shocking results as many of them were running out of food.
He said artists were calling literally crying begging for assistance and this was breaking up many families.

Penny Penny whose foundation also partnered in the initiative said artists don’t have support but they are approaching those who can to provide food for artists.

He called on other businesses to follow Matsila’s example. He said artists are already suffering because of piracy and Corona has exacerbated the situation.

The United Nations Education, Scientific and Cultural Organisation (Unesco) said while billions of people around the world turn to culture as a source of comfort and connection during the COVID-19 crisis, its impact has not spared the culture sector.

“More than 80% of UNESCO World Heritage properties have closed down, threatening the livelihoods of local communities. Museums, theatres and cinemas are losing millions in revenue each day, and many have had to let go of their staff. Artists across the world, most of whom were already working part-time, on an informal basis prior to the pandemic, are struggling to make ends meet. Today, we are experiencing a cultural emergency.”

Last month Unesco launched a global movement – ResiliArt to raise awareness about the far-reaching ramification of COVID-19 across the sector and aims at supporting artists during and following the crisis.

“The devastation brought to the entire culture value chain will have a long-lasting impact on the creative economy; ResiliArt aims to ensure the continuity of conversations, data sharing, and advocacy efforts long after the pandemic subsides.”

Chauke said it will take a long time for artists to recover from the impact of the covid-19 outbreak.

“Our people are crippled right now, I don’t think they will be prioritising buying CDs over sorting out their lives after lockdown. People will still need time to pay out their debts accumulated during lockdown, school fees, bonds and cars, it will take long before our fans can fully recover economically, mentally, emotionally and physically, now you see what I mean? We will sell our music to who?” lamented Chauke.

Although artists like the rest of society face a long struggle ahead – at least those benefiting from the food parcel initiative can take comfort in the fact that for a couple of weeks they will have something to eat and share with their families. – Mukurukuru Media