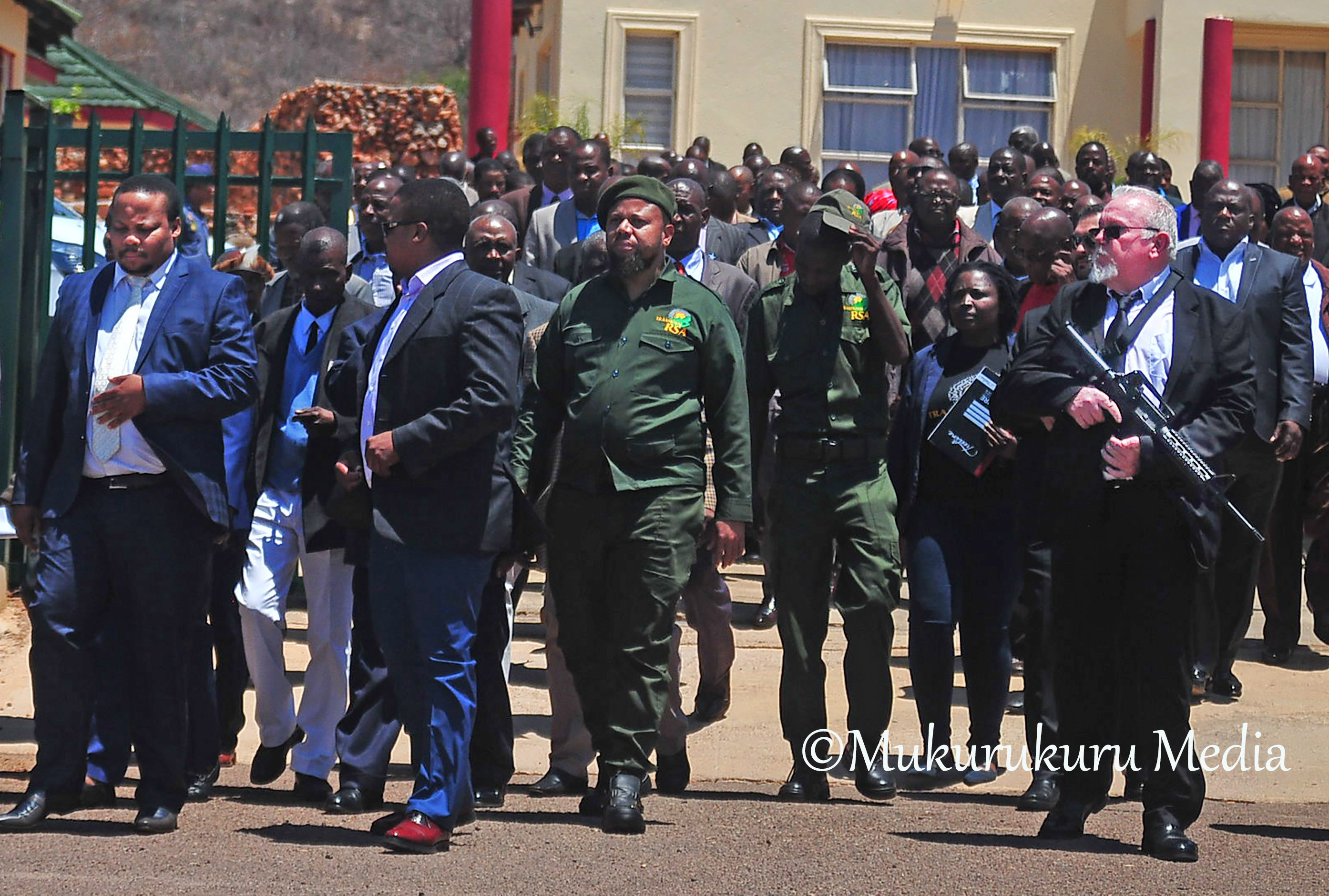 Thulare Victor Thulare III in white tie, extreme left of photo has been awarded a certificate confirming his position as King of the Bapedi nation. But his uncle and rival Kgagudi Kenneth Sekhukhune says he doesn't recognise Thulare as King. Here he is seen escorted by armed guards during a ceremony at his royal palace in Mohlaletse in Sekhukhune in 2018. Photo: Lucas Ledwaba/Mukurukuru Media

Just days after a notice recognising Thulare Victor Thulare III as Bapedi king was published in the government gazette on 3 April – his bitter rival and uncle, Kgagudi Kenneth Sekhukhune made a daring and dramatic announcement.

In a statement issued by his office on 6 April, Sekhukhune announced that an official ceremony to inaugurate Prince Sekwati II Khutjo Sekhukhune as Bapedi king had been set for 15 August 2020.

He also added: “His Majesty King Sekwati II (Phaahl’a Bauba) will be the king of the Bapedi Kingship even if he is not recognised by the state and not receiving benefits from the government.”

Sekhukhune’s announcement is in open defiance to President Cyril Ramaphosa’s move last month to recognise Thulare as king of the Bapedi nation in terms of the Traditional Leadership and Governance Framework Act 41 of 2003. The notice 449 was published in the government gazette on 3 April.

Ramaphosa’s recognition of Thulare as Bapedi king came after a Constitutional Court ruling on 4 March which upheld an earlier decision by the Supreme Court of Appeal rejecting Sekhukhune’s application to appeal a ruling of the North Gauteng High Court.

The North Gauteng High Court denied Sekhukhune leave to appeal an earlier judgment endorsing a 2010 finding by the Nhlapo Commission on Traditional Leadership to depose him as acting king and recognise Thulare III as king.

The dispute dates back to 1976 and escalated in 1986 when Thulare III’s father, Rhyne Thulare Sekhukhune, and his supporters launched a violent attempt to unseat his half-brother Kgagudi Kenneth (KK) Sekhukhune.

Sekhukhune was installed as acting kgošikgolo in 1976 after the heir Rhyne Thulare had refused to ascend the throne without the blessing of his mother Mankopodi, who was acting regent after the death of her husband in 1965. The matter became the subject of many court battles from 1988 into the mid-2000s.

After Rhyne Thulare’s death in 2008, his son Thulare III lodged a claim to the kingship with the Commission on Traditional Leadership and Claims [Nhlapo Commission]. In 2010, the commission recommended that Thulare III become the Bapedi king.

It handed its findings to then-president Jacob Zuma in January that year. Zuma made the announcement public in July 2010.

Although it appears Sekhukhune has now exhausted all available legal avenues following the ruling by the Constitutional Court last month – it is clear the battle for the throne of the nation that presides over mineral rich lands is not yet at an end.

Sekhukhune has since further announced that in fact Sekwati II – already assumed his duties as king on April 1 – meaning he doesn’t recognise Thulare III as king as per the order of the court.

This, he said, followed a consultative process in line with Bapedi customary law and practices in which the bakgoma, bakgomana and dikgadi [traditional/royal council] had deliberated over the succession issue and decided on Sekwati II as the rightful heir.

Sekhukhune also mentioned that the deliberations were attended by over 80 percent of members of the traditional/royal council and royal family – implying he enjoys the support of this significant arm of traditional leadership.

He referred to Thulare III’s recognition by the presidency as ‘dramatically imposed’ by Ramaphosa and further accused the government and judiciary of favouritism. Sekhukhune said he will launch a review application after the national lockdown to challenge Ramaphosa’s decision.

Interestingly, the traditional council and royal family meetings mentioned by Sekhukhune all took place after the March 4 ruling by the Constitutional Court.

Although Sekhukhune’s latest move sets the stage for another bruising leg of the protracted battle, he goes into this one weakened and with the odds much against him.

The NHTL cited the Constitutional Court judgment saying “it provided the much needed clarity.”

The NHTL chairperson Ikosi Sipho Mahlangu “emphasised the importance of our courts as the final arbiters on all matters.”

“The NHTL is ready to work with His Majesty King Thulare on all matters of common interest and to apprise him of the work of the institution thus far. The NHTL is available at any time to help His Majesty on building unity, social cohesion, and contributing to ending Gender-based Violence (GBV) as well as domestic violence in South Africa,” said Ikosi Mahlangu.

“The leadership of Contralesa is confident that the Bapedi ancestors and the god of Africa will give utmost blessings and wisdom to King Thulare as he assumes the Highest Royal Office in the land of His Forefathers,” he said.

At the weekend public messages of congratulations to Thulare III from both the ruling African National Congress and popular opposition the Economic Freedom Fighters.

With both the NHTL and Contralesa, powerful statutory bodies expressing their unwavering support for Thulare III and the country’s two popular political parties adding their voice to Ramaphosa’s decision, this leaves Sekhukhune in the precarious position of a naked emperor.

As it stands the only support he may be enjoying at present is that of his close supporters in the traditional/royal council and family. The royal council is a powerful body made up of close members of the royal family.

In the politics of traditional law the royal council is considered essentially a body even more powerful than the king in that whatever key decisions are made by the king, are taken after reaching a consensus with the council. Technically the royal council can and may, in certain instances, even overrule their leader.

They also preside over the coronation ceremony which includes the passing down of the sacred royal necklace, leopard skin and other items passed down from generations dating back centuries.

Without these symbolic and sacred items, regardless of whether Thulare III possesses a certificate signed by the president, the traditional/royal council and nation would not consider him as their king and his reign may be a troubled one.

It is therefore indisputable that Thulare III would need the support of the traditional/royal council, a body comprising hardcore traditionalists, many of them who have spent the better part of the last 40 years serving under Sekhukhune.

Will the latest developments see them easily switch allegiance to Thulare III or stick with Sekhukhune?

Sekhukhune has signalled he would not let go of power in this lifetime by suggesting compromises that blatantly indicate his intention to hang in there no matter what.

Amongst the compromises, Sekhukhune suggests a dual kingship between his anointed successor Sekwati II and Thulare III with him as acting senior traditional leader of the Marota Mohlaletse traditional authority.

But more critically and perhaps a blatant indication of what’s truly at stake, Sekhukhune also suggests that Sekwati II be made principal traditional leader of Bapedi under the Marota chieftainship and chairman of the Bapedi Nation Trust. Bapedi preside over land which boasts some of the largest platinum group metals in the world.

Although the Bapedi Nation Trust is allegedly responsible for all mining operations in the kingdom, its operations remain shrouded in mystery. It can also be argued that if indeed the trust was working in the interests of Bapedi as a nation; they would have much to show in terms of development and developmental projects from the billions made from the extraction of the large platinum metal group deposits from their land.

Instead the area known as Greater Sekhukhune remains among the poorest in the country despite the fact that during the 2018/19 financial year Limpopo accounted for 24 percent of the national mining output, most of it generated from the platinum belt on Bapedi land.

At present the Limpopo province awaits the commencement of the R25 billion Tubatse Special Economic Zone – a mining and processing project to be located in the heart of Bapedi land.

This raises the crucial question whether the glitter of platinum and resultant big bucks is perhaps the main reason why even a Constitutional Court ruling and a presidential recognition isn’t enough to bring finality to the dispute?

To his credit Thulare III has used public platforms to call for unity and reconciliation between the warring factions. But whether such statements will result in action on his part remains to be seen.

But what is clear is that Sekhukhune isn’t prepared to go down without a fight. He states in his statement challenging Ramaphosa’s decision: “As things stand now, at [sic] far as government and Bapedi are concerned, Bapedi nation has two kings; one king is recognised by the state in accordance with the commission and the courts and the other one is recognised by the Bapedi royal family and majority of Bapedi nation in accordance with Bapedi customs, culture, traditional practices…”

Who will prevail? – Mukurukuru Media