An encounter with the gentle giant of the wild 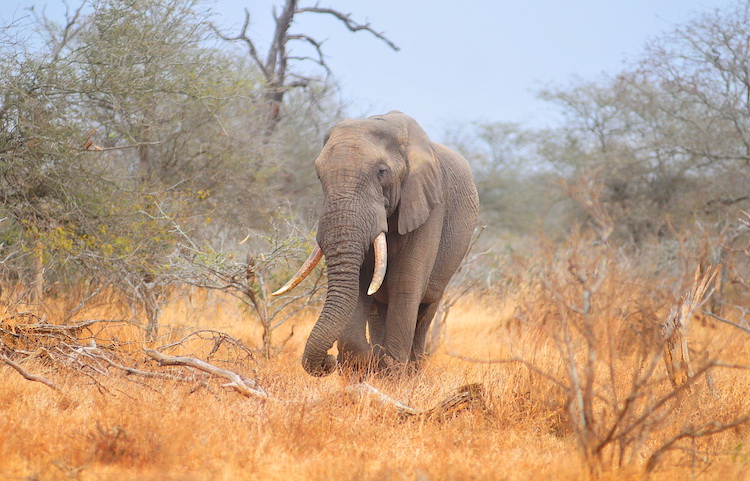 They say Ndlulamithi earned his name because he stood at a towering 3.4m. So, for that reason the Nguni speaking people gave him this name which when translated into English means one who is taller than the trees.

They also say that Ndlulamithi possessed handsomely curved tusks with the left one sweeping low and well forward. They say these tusks were considered significantly more twisted than those of the other large bulls.

In case you are wondering who on god’s earth is this Ndlulamithi, well, he is one of the Kruger National Park’s legendary Magnificent Seven. These were seven awe-inspiring elephant bulls with unusually massive tusks weighing more than 50kg each.

Ndlulamithi’s impressive tusks together with those of five others from the Magnificent Seven are now well preserved at the Elephant Hall in the Kruger’s Letaba Rest Camp.

The length of his left tusk was an amazing 2.87m in length, while the right one stood at 2.73m. This was substantially longer than the average human height of 1.79m.

The Elephant Hall is a must visit for wildlife enthusiasts and especially children. Don’t they say it helps to start them young?

The tusks of Ndlulalamithi, Dzombo, Kambaku, Mafunyane, Shawu and Shingwedzi are nicely displayed in an open hall which also contains valuable information about the behaviour, reproductive patterns and valuable historical accounts of interaction between man and elephant.

One of the interesting facts about Ndlulamithi, who they say was first identified in 1980 was that he was an aggressive yet secretive elephant who was seldom seen. The bull died of natural causes in 1985, aged an estimated 58 years of age. Now imagine the fear in my bones when while still thinking of Ndlulamithi’s enormous tusks a few hours after visiting the hall when I suddenly found myself within trampling distance of an elephant smack in the middle of the Kruger National Park.

I had stopped at the Masorini Archeological site, one of the numerous places in the Kruger where you are allowed to get out of your car and take a lazy walk. This is of course at your own risk because the area is not fenced off, so you never know what could be lurking among those boulders.

While I’m no daredevil, I’m one of those sceptics who believe that if it’s your time to meet your ancestors, there is nowhere you can run. You may escape from the clutches of a lion or from a marauding elephant in the morning, only to choke from a tea bag in the comfort of your own home in the evening and kick the bucket.

Anyway, visitors to such sites as Masorini and numerous other picnic sites are always advised to be cautious, observant and not to venture away from the designated areas for visitors.

I was surveying the giant boulders stacked up impressively one on top of another when out of the corner of my eye I noticed a giant, casual moving figure just about 50m away. The distance could have been less than that in fact.

And there it was, the gentle giant of the Africa bush going about its business with no care in the world. It was so close I could hear the twigs breaking from the trees as the elephant took what I assumed was an afternoon snack.

And each time I clicked my camera, the elephant would pause briefly and sort of look in my general direction. I may be wrong, but I got the impression he liked the click, click, click sound made by the camera.

Naturally I was worried about how the giant would react if it became annoyed by my presence. Especially since it was late afternoon and the site was all but deserted except for a couple who stopped briefly in their roaring 4×4 before driving off again.

The elephant was there for about 10 minutes. It was the longest and greatest 10 minutes of my wandering life for it doesn’t happen often that one gets to be this close to one of these giants on foot.

It must have gotten bored with the sound of my camera before heading back deep into the bush. Such is the beauty of being out in the wild. The experience humbles you. It reminds you we are just but a small element in the bigger scheme of natural things.

As I walked closer to the information centre on the western side opposite to where I had spotted the elephant, I heard a noise somewhere among the boulders to my left. I froze in shock.

And right there not far away a klipspringer sauntered casually onto the giant rocks. It suddenly became aware of my presence, stood still and gave me this curious look. I swear if it was human it would have remarked: “En nou bro?”

Ag, well, it was a glorious end to a beautiful, long, lazy day in the Kruger. Go there for some peace and quiet. It never disappoints. – Mukurukuru Media

More info about the Letaba Elephant Hall from the SAN Parks website:

Rates: South African citizens and residents (with ID):
R100 per adult, per day
R50 per child, per day
Prices correct at the time of publication and is subject to inflation.

Published in Our Stories and Tourism