Bonding with the ancestors as African New year dawns 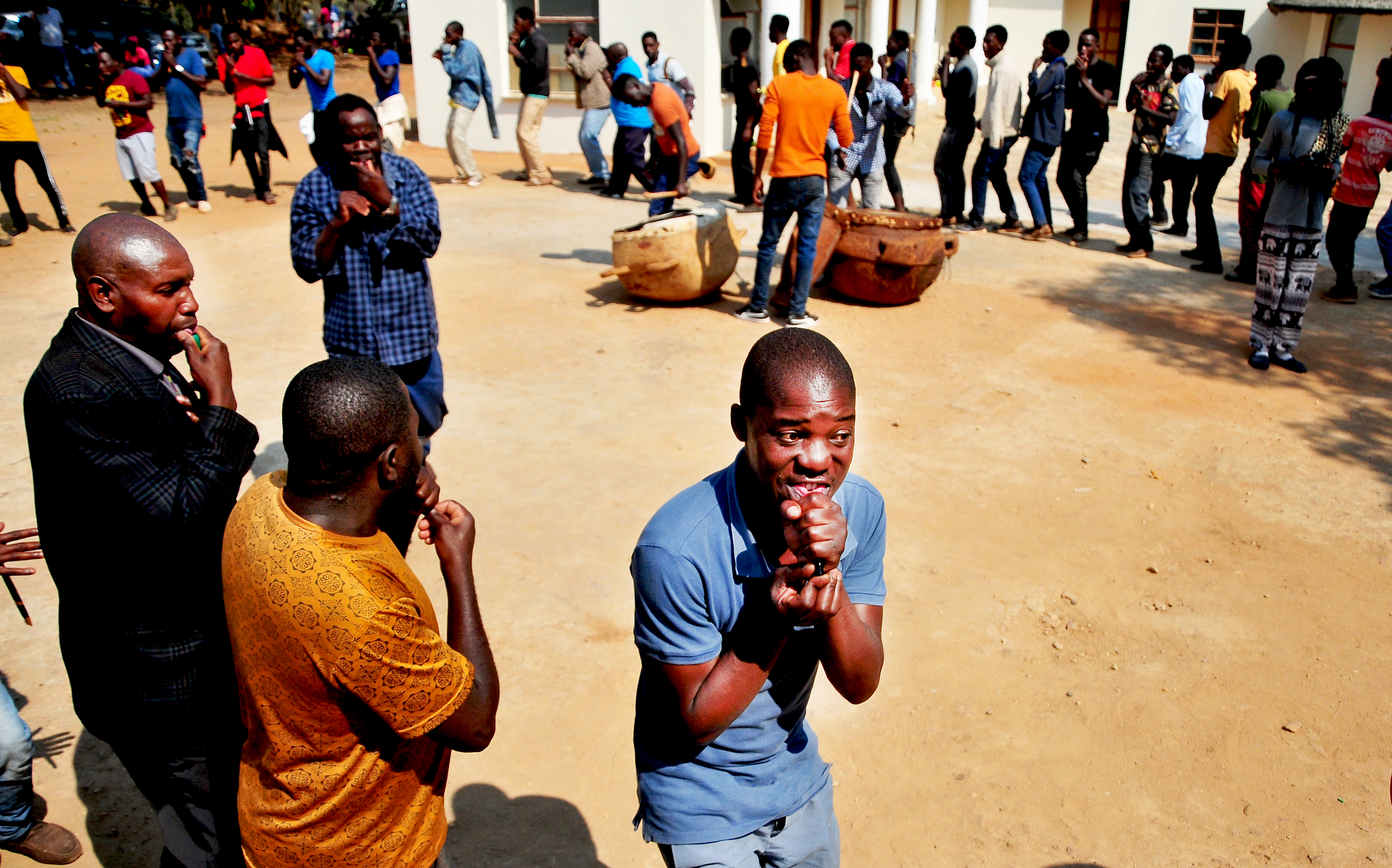 Tshikona traditional dancers in full swing. The dance which is performed by men is considered an integral part of spiritualism and worship among Venda people. Photo: Lucas Ledwaba/Mukurukuru Media

A man on crutches moves his head slowly to the beating of cowhide drums and the whirring of the tshikona pipes. He has been standing on the sidelines, taking in the exhilarating sound from the wind pipes for a while.

“Dudum… dumdum,” the young men in the centre of the circle, their faces wearing a deep look of concentration beat the wooden carved, cowhide drums in response.

Their faces glistening from perspiration and shirts drenched in sweat, the tshikona men sway this way and that, lifting one foot into the air, then turn with the other to stomp the ground. Bursts of dust explode under the pounding feet.

Women ululate loudly, their voices echoing through the excited frenzy. One way or another, young and old feel the music course through their bloodstream. The music touches and moves in a way a diviner mends a troubled heart or calms a thumping headache.

The tshikona are performing in the centre of a homestead watched by a crowd of adults and children and other dancers from the tshigombela, the women’s version of the tshikona. Elsewhere on the grounds of the cow dung floored homestead, calabashes lie upside down next to sacred aloe plants alongside rusted spears, sticks – a sign of the uphahla rituals observed here at the crack of dawn.

As the day grew longer and the sun beat down harder on the earth like a furnace, so rises the music to the sky in celebration.

The man on crutches stands among the crowds watching the rhythm of the dancers. He raises one crutch pointing at the moving circle of men. Then the music possesses him. He can take it no more. In a flash he moves with unbelievable agility into the centre, jumping, turning, feinting a fall, turning this way and that.

The drumming seems to stir some hidden source of energy from deep within his being. The enthusiastic crowd urges him on. Still on his crutches he holds on the ground and makes as if to do push ups. For a moment it seems he has no need for those crutches – the music, it appears, has healed that amputated right leg.

“We are bonding with the ancestors through this ceremony,” the host Joseph Mberengeni Maada says about the festivities that started the night before in mid-September to mark the beginning of the African year.

Maada, a cultural and heritage custodian of the Venda people and African culture in general hosts this ceremony every five years in line with tradition.

In September he was awarded the Ubuntu Award in the Golden Heritage Awards hosted by the National Heritage Council of South Africa (NHC) in partnership with the Limpopo Department of Arts, Sports and Culture.

The awards honour “champions of heritage with their golden shields for their selfless contribution in preserving and promoting our heritage.”

Coincidentally the awards ceremony in Polokwane coincided with the commencement of the holy ceremony that night, when healers, tshikona dancers and ordinary folk began with the sacred ceremony of giving thanks to the gods on the Friday night.

He says the three day event is divided into three parts; the first day is family gathering where the clan perform scared rites to ask for the rain, a good harvest, good health and for guidance from the ancestors.

The second day, where the tshikona men mesmerised the man on crutches if a day of celebration and the final day is reserved for spiritual engagement observed through the malombo drumming. Different groups of traditional women groups, tshigombela also perform on the second day alongside the tshikona.

Two cattle were sacrificed to mark the occasion and drums of beer brewed for both consumption and as an offering to the gods.

“In African culture we all agree that the year starts during Khubvumedzi [September],” explains Maada.

Khubvumedzi or Lewedi in Sepedi is considered a time of renewal because even nature itself undergoes a renewal of sort with trees flora blooming and animals giving birth. In southern Africa it also marks the beginning of the rainy season and the ploughing season.

In Ethiopia the New Year is still celebrated in the second week of September, while other cultures mark the celebration in October.

Revered African sanusi Credo Mutwa writes in an essay titled October in Africa, that “it [October] was a time of peace and celebration, beauty and happiness. It was a time in which human beings remembered God and the ancestral spirits. It was a time of sharing, of gift-giving, and of healing.”

Mutwa writes that October [Kwindla/Lekwetla] was “the month when people had to meditate on the deep mysteries of life and creation, of birth, growth and death.”

Maada says in years past traditionally the royals would perform sacred ceremonies at the fall of the first full moon in Khubvumedzi. These are secret rites open only to a select few. Then the following week the commoners would brew beer and join in a massive celebration hosted by the royals at the mushade [royal homestead].

“Our problem is that we have abandoned everything that belongs to us. We are like zombies. Even the royals these days are captured,” Maada says, lamenting the move away from traditional values influenced by other cultures and religion.

Central to the ceremony is the murumba [drum], which is considered a hallowed instrument when communicating with the spiritual world. The shedding of blood and brewing of beer are also critical in
forming a bond between the living and those that have passed onto the spiritual world. The blood symbolise the livestock and game the gods have given to the people, while the beer is a symbol of harvest nourished by the rains.

Maada explains that there are different types of drumming, performed by different categories of people.

“Not just anyone can beat the drums. People are born for this important role. They are spiritual children whose role determined long before they are born,” he says.

“We [Africans] have our own way of communicating with God. But the colonialists used the four Cs strategy, – conquer, civilise, Christianise and commercialise to destroy who we are. Their aim was to ensure that we lose who we are.

“Every group of people have their own land, culture, religion and language – that’s what makes a complete person. If you no longer know your culture, what are you because you don’t know yourself?” argues Maada.

He argues that many of the ills in African society can be traced back to the loss of identity, cultural values and religion.

“You lose your character, [your] personality,” he says.

Maada is a strict adherent to African Traditional Religion [ATR] and dispels the false notion created by Christian missionaries that Africans didn’t have any way of communicating with god and that their religious practices and beliefs were inferior.

The relegation of African Traditional Religion by Christian missionaries has long been the subject of animated debated and scholarly research.

Nigerian scholar Joseph Olowalu’s describes ART as “the religion without a founder, as the founders cannot be found no matter how far we go back to history.”

Maada agrees that “there is no nation that doesn’t know how to speak to God. We have always communicated with God in our own way, in the same way Jews, Hindus and other nations communicate with God in their own way.”

In his paper published by the University of Pretoria in 2011, titled ‘Christianity and the African traditional religion(s): The postcolonial round of engagement,’ scholar David T Adamo makes the point that during the early days of missionaries, travellers, anthropologists and historians, there was no acceptance of any existence of anything called African history (Fage 1970:1); and that African Traditional Religions [ATRs], despite the fact that they struggled with the adherents of this religion and tried to condemn what they thought never existed.

“Consequently, the one without history cannot have religion (Denis 2006:312). To some anthropologists, ‘untutored’ Africans cannot know God as the idea of God is philosophical. To the missionaries in the early days, Africans were not fully human; they prohibited polygamy, initiation rites, ancestor worship and other indigenous practices (Mercado 2004, 2005:99).”

Maada believes there’s a need to spread this knowledge among all sectors pf society, especially the youth in the present day.

To this end he is among a group of people who have started the National Spirituality Council whose aim is to teach African spirituality at schools, universities and in the broader community.

“We want everybody to me a member. We have advocates, professionals, everyone. People must never abandon their culture. The minute a person abandons their culture they are like a zombie.” – copyright Mukurukuru Media